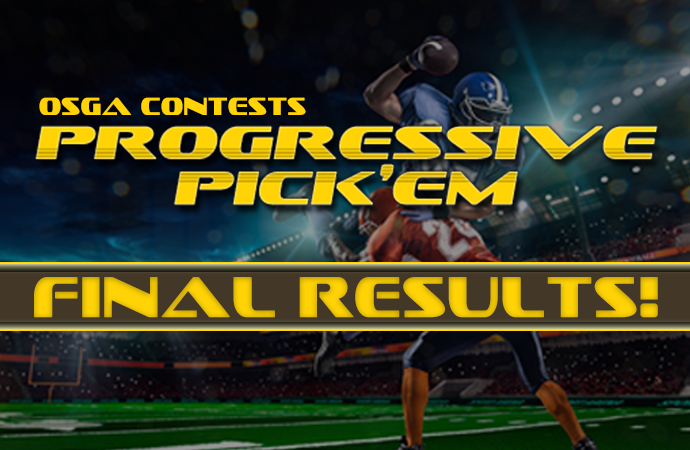 After paying out the largest prize ever for an OSGA contest, congratulations go out to the season long winners.

The 16th year for the OSGA NFL Progressive Pick â€˜Em saw the biggest jackpot ever paid out. The weekly prize winners cashed in often, with 20 sportsbook prizes handed out over 18 weeks, and the final leaderboard saw just a 500 point separate first place from 16th.

For starters, the weekly contest prize that builds at $100 per week for a perfect card was not hit until the next to last week of the NFL season! The perfect score prize was hit in Week 17, creating the largest pool ever, including years when it was not hit at all hit during the seventeen week season. The tie-breaker was employed several times and in two weeks two players tied at the top of the leader board, even picking the exact same tie-breaker! 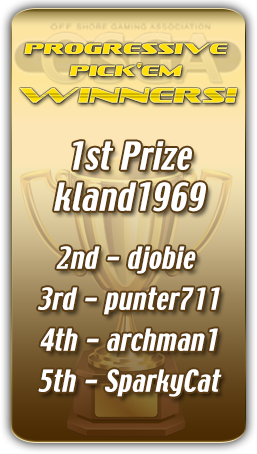 Congratulations to â€˜kland1969â€™ who averaged more than 10 wins a week for the entire season to win the 2021 OSGA Progressive Pick â€˜Em, despite never capturing the weekly prize! Adding in the extra points awarded for a correct Monday Night Football pick and â€˜kland1969â€™ amassed 19,100 points â€“ just 200 points from the record of 19,300! In the wake of ‘djobie’s’ huge win in Week 17, it was a good thing this year’s pool was guaranteed, and ‘kland1969’ cashed for $500.

The first five places at the end of the season are all winners in the OSGA Progressive Pick â€˜Em and after more than 500 games, just 200 points separated all of the prize recipients. Long-time OSGA contest participant â€˜djobieâ€™ also hit the 19K point mark and cashed the second place prize, in addition to his big score last week, with 181 correct picks. â€˜punter711â€™ also had 19,000 points and picked 179 games correctly, but lost the tie breaker (the number of correct picks) to finish in third, ending up with the 3rd place prize of $125.

Fourth place paid out $100 in the guaranteed pool and â€˜archman1â€™ cashed that with 18,900 points and 179 wins. The final winner, ‘SparkyCatâ€™ has cashed in contests over the last decade and was good enough to take 5th place this year with 178 correct picks. ‘BU’ who was the winner back in Week 2, just missed cashing in on the cumulative prize, but had 177 wins, just enough to finish behind ‘SparkyCat’.

We would like to thank all the players and sponsors in the 16th annual OSGA Progressive Pick â€™em. Special shout outs go to â€˜chiefâ€™, â€˜dsheafferâ€™ and â€˜tmt228â€™, who each won the weekly prize two times, but unfortunately came in 7th, 40th and 50th respectively in the season-long contest. Sponsors included WagerWeb, BetPoP and BetUS, with BetPoP and BetUS ponying up double prizes in the two weeks where there was an exact tie between players. These sportsbooks offered varying weekly prizes, from parlays to free plays and made good on over $1000 worth of no-deposit, free bets.