From the Rumor Mill: Despite investment in Huddle Tech, LVSC likely has no plans for online gambling any time soon 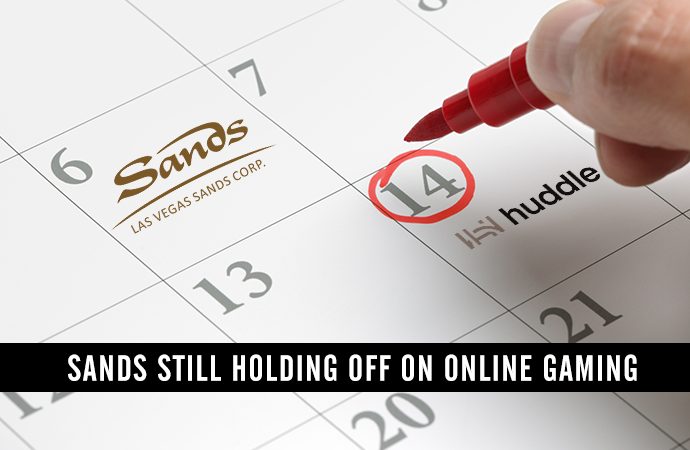 Unless something changes in the boardroom at LVSC, an investment into sports tech company, Huddle Tech, will not result in BetSands.com in the near future.

Is the LVSC investment in Huddle Tech a precursor to online gambling?

I was intrigued to read reports that LVSC had invested money in Huddle Tech, a company which offers online gambling solutions, including software design, risk management and odds feeds. Huddle Tech has offices in Henderson, NV, Dover, DE, England, Croatia and the Isle of Man. The move seemed to indicate that LVSC may be looking to move into the online gambling space, which of course would be a huge deviation from Sheldon Adelson’s previous stance of never supporting online gambling.

Adelson was so adamant about the issue, he even invested time and resources to convince GOP Senators and Congressmen to introduce the Restoration of America’s Wire Act (RAWA) bill into both legislatures and he created a website to warn of the dangers of online gambling. The bill almost came to fruition in December 2018 when the Department of Justice, under Rod Rosenstein, issued a new opinion reversing the 2011 DOJ opinion under Barack Obama and told states to prepare to cease online gambling. That new opinion, however, was defeated when a district court in New Hampshire ruled the motion unconstitutional and it died on the table, as the GOP focused its efforts on the 2020 election.

It was accepted by most analysts that Adelson’s biggest objection to online gambling was the fact it would cannibalize visits to land-based casinos and the Venetian and Palazzo are two of the most renowned casinos in Las Vegas that rely heavily on the charges for accommodations, dining and entertainment for its profits. The company also operates other high-end casinos in Asia and had a large casino in Pennsylvania. Online gambling naturally would provide none of this revenue. But I have a contact in Las Vegas who was relatively close to the Adelson’s who assured me that Sheldon Adelson was truly concerned about the dangers of problem gambling online and he wasn’t convinced technology would keep away underage gamblers. He always claimed it was easier to monitor activity and deal with it in a physical casino. The source also told me that he is relatively confident that LVSC will not get involved in online gambling as long as Dr. Miriam Adelson is in the picture.

“I’ve known the Adelsons for some time and never knew a more committed couple. Miriam knew how much her husband despised online gambling and would never disobey his wishes, even in death. So, I’m confident that as long as she and the family have majority control they will not get involved online. I’m also quite sure that she shares the same concerns about online gambling that her husband had, especially in relation to underage gambling.”

Asked why the company would invest in Huddle Tech, the source said that most LVSC managers were not on board with the Adelsons and feel that online gambling is the future. He even indicated that some managers outright said in meetings that not “at least pursuing” the possibilities of online gambling is a mistake. No doubt other shareholders feel the same way too. This is particularly true after LVSC sold its Las Vegas properties to Vici Properties and Global Asset Management (GAM) not long after Sheldon Adelson’s death. And GAM has been interested in online gambling for some time. GAM was the front runner to acquire the non-U.S. assets of William Hill, but lost out to 888 in the end. No doubt GAM would love to see something like BetVenetian or BetLVSC become a thing in the future.

It is also notable that Dr. Miriam Adelson is in her mid-70s, albeit quite healthy, and there could come a time she just steps away and sells her shares of LVSC. If that happens, the company will want to be able to make the leap if they believe it is best for them. It doesn’t appear either of Sheldon’s surviving two adopted children with first wife Sandra would have any interest in the company and if Miriam steps away, it would be likely that her two children with Ariel Ochshorn would have any sway.

And the propensity to simply walk away is not unfathomable. Steve Wynn shared Adelson’s concerns about online gambling, but WynnBet is now live in nine states. When Wynn stepped down as CEO of Wynn Resorts in 2018, it appears that he completely walked away and let the new company managers decide how to run the operation without interference from him. And obviously the new management viewed online gambling as a necessity to grow.

So, if the rumors prove to be true, the investment by LVSC in Huddle Tech was simply to be ready if the company decides to move into online gambling. But that time still doesn’t appear to be any time soon, unless Dr. Miriam Adelson decides she’s had enough.