From the Rumor Mill: BetFanatics looks to purchase an existing sports betting operator and take bets by Labor Day 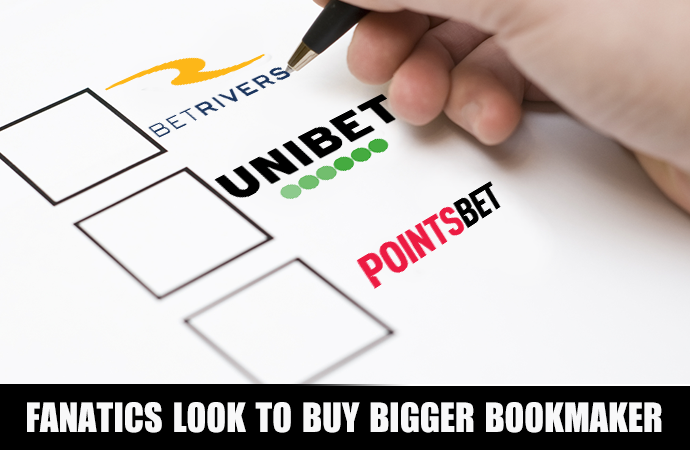 While it is well known that Fanatics is planning to start U.S. sportsbook operations, having hired on former FanDuel CEO and founder Matt King last year to head up its operations, the question was when BetFanatics would launch and which companies, if any, they would purchase to get a head start with their product.

Rumors have bandied about for a while that Fanatics was going to purchase Tipico, a German company with operations throughout Europe as well as a physical and online presence in New Jersey and Colorado, but sources have told me that Fanatics is eying a bigger fish. The source, who is a well-respected gambling industry insider, said that he has it on good authority that Fanatics has already agreed to buy the U.S. operations of Tipico since that company realizes they will not be a huge success in North America, but Fanatics also wants to buy a larger company with a presence and customer base throughout the United States that is well established and whose valuation is low enough to make sense. He says the three companies he hears that are in serious talks with Fanatics are PointsBet, BetRivers and Unibet.

“I have been told that the sale of Tipico is done, but the details being worked out now is what to do with the non-U.S. operations. Like with Caesars, who only wanted the North American operations of William Hill, Fanatics has no interest in Tipico’s operations in Europe. And to be e frank, Tipico would prefer to keep its German business, so it works well for both companies. But with such a small presence and unknown brand in most of the United States it would be hard for Fanatics to make the huge first impression or have a relevant customer base that they say they need to, if they only acquired Tipico. So, I asked around and it’s clear that Fanatics is looking for another sportsbook already in operation to acquire.”

“Michael Rubin (Fanatics CEO) said that he wasn’t interested in an existing operation with U.S. owners since they have a business model that guarantees losses, but he may make an exception with Rush Street (BetRivers). Unlike the big four (FanDuel, DraftKings, BetMGM and BetCaesars), Rush Street hasn’t gone overboard with acquisition costs, excessive advertising and bad promotions, so I am confident that Fanatics would agree to a takeover of Rush Street, which has operations in six states and Ontario under the BetRivers name . . . if the price is right. If Rubens is being truthful, though, Rush Street probably is the last choice.”

“Unibet is an intriguing situation. They have operations in several states that span the whole map of the U.S. They would be relatively cheap too, provided that Kindred Group would be willing to sell only the North American operations of the sportsbook. Unibet sportsbook is small potatoes in the United States currently and they know that they won’t be able to take on the big guys in terms of revenue. But if Kindred insists that Kambi (which is mostly owned by Unibet) is thrown into the mix or even some of the other B2C companies that Kindred owns, then the price point may not make sense.”

“Fanatics will be huge and could surpass the Big Four in just a few years.”

“From what I know about Matt King, he will want to build the company mostly from the ground up and wouldn’t be interested in a B2B company like Kambi, which already supplies software to many other operators, including what would be Fanatics main competition. PointsBet is probably the favorite because they are Australian owned and have a great model that would fit well with Matt King’s business style, have a good customer base in 10 states and Ontario and honestly, they are underperforming so there is a lot of room for growth. They will likely be in Arizona too soon and no doubt will have a stake in new states that begin operations. And if Fanatics takes it over, they will pop up in the other states that PointsBet has failed to make inroads with. The one downfall of PointsBet is the perceived valuation. PointsBet has stated on record that they will be a $20 billion stock by 2025 and I have no doubt that is what the shareholders would demand. The stock is currently at $2.50 USD per share and I’m guessing the shareholders will demand about $4 a share to let it go. The company would also have to deal with Penn National, who are the main shareholders of the stock and still have grand plans for Barstool Sports. So, if I had to hazard a guess, Fanatics will purchase PointsBet if they can get it at a good price. Failing that, they will look at Unibet if they can acquire only the North American sportsbook operations of the company. And failing that, they will look at the other options out there like BetRivers or maybe even a different foreign operator who has more or less abandoned making it big in North America like LeoVegas or Fitzdares who won’t provide them with a customer base, but can provide them with some useful personnel. Regardless of who they acquire, Fanatics will be huge and could surpass the Big Four in just a few years.”

When will the first bet be taken?

The other question is when Fanatics will kick off operations once they complete the acquisitions. I spoke to someone close to the company who said it was coming sooner rather than later. When I asked if that would be Christmas, he replied that the company should be well established by then. He did say, however, that they are eying a different national holiday to make a huge kickoff splash.

When I pressed for a clearer answer, he said he couldn’t answer that, but asked “Did you known that the NFL regular season is about to start?” With the season kicking off September 8th that was a clear indication to me that Fanatics is eying operations by Labor Day, September 5th.

It would make perfect sense as well, since that will be a busy time for Fanatics’ main product of sports gear and they could launch sportsbook operations using its partnerships with the NFL to offer NFL gear and perhaps tickets in exchange for signups. I did say to my inside source “so you mean Labor Day?” His only reply was “You said that, I didn’t.”