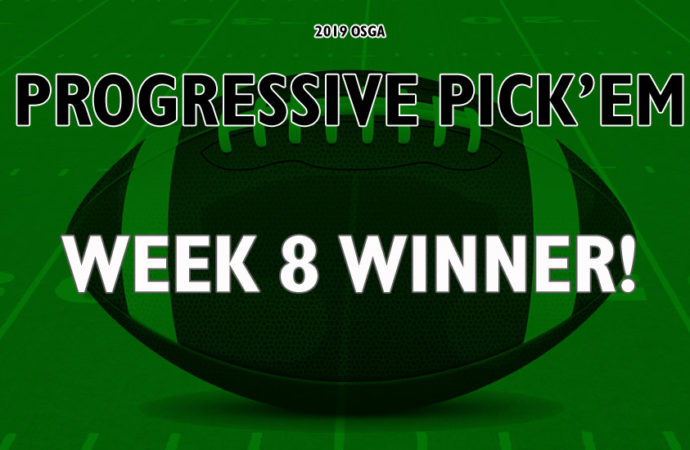 The OSGA Progressive Pick ‘Em has again been hit in Week 8 of the NFL season. 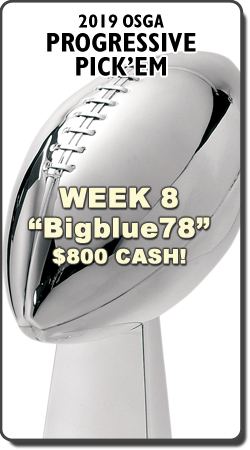 The OSGA Progressive Pick ‘Em is again the featured Free NFL contest on OSGA.com,with over 150 participants and thousands in cash and prizes up for grabs. Each week players pick all of the NFL games on the board straight up, with no point spread. Both a season-long contest and a weekly contest, the progressive aspect of the contest rewards players who can pick all of the games on the board correctly, straight-up, with no point spreads. Each week the pool builds by $100, so in Week 8, the prize to seep the board was $800.

Week 8 of the 2019 NFL season saw 13 favorites win straight-up. ‘Bigblue78’ managed to pick the two dogs that came out on top. If he had missed just one game, there were 16 other players who picked 14 games correctly, missing just one dog. The Bears loss to the Chargers took out 7 players from making 100% correct picks and the Bills loss to the Eagles eliminated 5 more. ‘Bigblue78’ came out the gate strong with three straight 10+ win weeks, but recent picks have not fared so well and he currently sits in 69th place overall. It is great to see how this contest can reward any player who gets on a huge roll!

The Progressive Pool starts again this week and will continue to grow until the end of the season. The Progressive prize has only been hit twice in the same season, back in 2012, so we expect the pot to grow for the next 9 weeks. If no one manages to get all the winners on the board picked correctly, the remaining $900 will be split between places one through five at the end of the NFL season. The current leader, ‘Smoke Porterhouse’ has 84 correct picks through 8 weeks and leads ‘romjay5150’, ‘punter 711’ and ‘Rewster’ by just two wins and just 7 wins separates the 25th player from #1. It’s still anybody’s contest.

Head to OSGA.com today and get your picks in for Week 9.