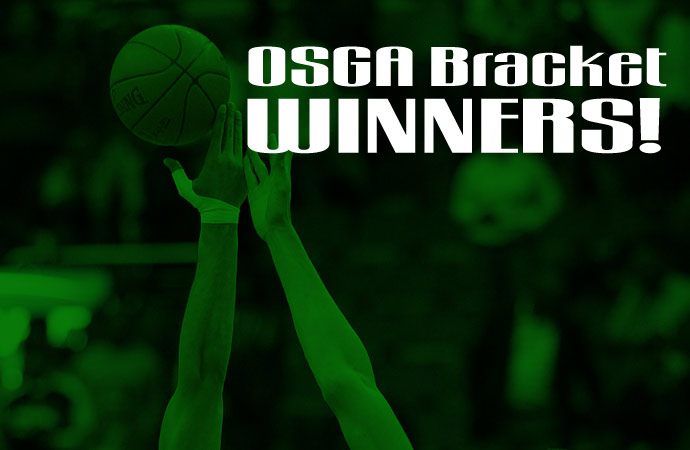 Congratulations go out to ‘Patek’, a long-time players in OSGA free contests, who won the 2019 OSGA NCAA Tournament Challenge by amassing a whopping 91 total points.

Last night’s NCAA Men’s Basketball Championship game was supposed to be a low scoring, grind-it-out almost boring final. But, it turned out to be a great game with plenty of scoring and . . . overtime. Now, it is time to crown the winner of the 2019 OSGA NCAA Tournament Challenge.

Congratulations go out to ‘Patek’, a long-time players in OSGA free contests, who won the 2019 OSGA NCAA Tournament Challenge by amassing a whopping 91 total points. ‘Patek’ came out of the weekend looking good as one of only two players to have both teams in the Championship game, along with ‘heyunc’. But with 43 correct picks ‘Patek’ pulled out the victory and will get a check for a cool $250 courtesy of OSGA. 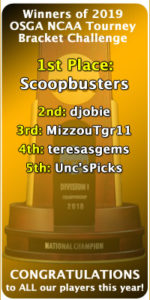 Second place belongs to ‘djobie’, another frequent contest player. He had three of the Final Four teams, but had Michigan State taking on Virginia in the final. Though he picked more overall winner than ‘Patek’, ‘djoibe’ finished second and will collect $125.

‘MizzouTgr1’ ran away with the OSGA contest early and had a huge lead heading into the Elite 8 round. And though he had 49 correct picks out of the 63 games, that was not enough to stay on top of the leaderboard until the final game. He finished tied for 3rd with ‘teresad1’, both collecting 86 points. So we had to go to the tie-breaker – the total points scored in the NCAA Championship game. No player was expecting the very low scoring final that was predicted. ‘MizzouTgr1’ had 143 total points and ‘teresad1’ came in with 129. When the game went to overtime, ‘MizzouTgr1’ was in the clear. A total of 162 sealed the deal for ‘MizzouTgr1’ to claim sole possession of 3rd place, despite not having the tourney winner, and collect a hundred bucks. ‘teresad1’ will get $75 for her efforts.

Which leads us to 5th place, where ‘heyunc’ also had both teams in the final. He came out of nowhere over the weekend with his pick of Texas Tech and will get $50 for his efforts.

The real shame is that no player was an OSGA member and thus able to collect double prizes. Several players had been members at one time, but no active member hit the leaderboard.

This was the 18th year for the OSGA NCAA Tournament Challenge and again this year the standings flipped and flopped from day-to-day though ‘MizzouTgr1’ held on to first place for much of the tournament. We enjoy bringing these contests to everyone, but wish we had seen an OSGA member cash-in with one of the biggest benefits of membership, 2X prizes in all of our contests.

Players should check back often for more free contests and we urge players to enroll in our annual football contests come September. In 2019, OSGA is committed to offering more contests, with more great prizes for all members, fans, friends and visitors.