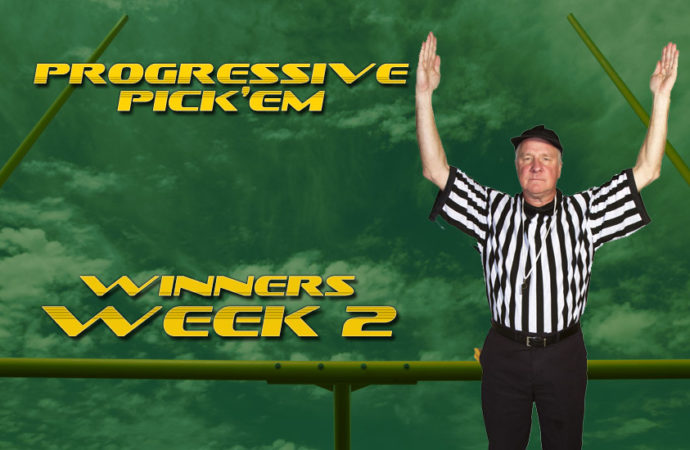 In a shocking start to the OSGA Pick ‘Em the Progressive Pool was hit in Week 2.

It’s hard to believe that just two weeks into the NFL season the Progressive Pool in the 2020 OSGA Progressive Pick ‘Em has been hit! And not just once . . . twice!

That’s right in this crazy year, the madness has come to the OSGA Pick ‘Em. Six players went into Monday Night football with 15 correct picks, four had the Saints and two had the Raiders. So, the come-from-behind victory by the Las Vegas Raiders, 34-24, cashed for two players. ‘deanna61’ and ‘biglakeshow’ will split the Progressive Pool with perfect 1700 point scores.

The OSGA Progressive Pick ‘Em is again the featured Free NFL contest on OSGA.com, with over 110 participants and thousands in cash and prizes up for grabs. Each week players pick all of the NFL games on the board straight up, with no point spread. Both a season-long contest and a weekly contest, the progressive aspect of the contest rewards players who can pick all of the games on the board correctly, straight-up, with no point spreads. Each week the pool builds by $100, so in Week 2, the prize to seep the board was $200. According to the contest rules, ‘deanna61’ and ‘biglakeshow’ will each get a $100 cash prize. 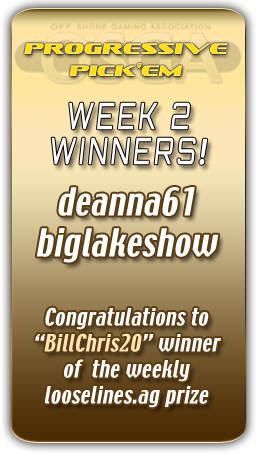 Looselines.ag. So, ‘ChrisBill20’ cashed in for the weekly prize with just one loss and 1600 points. And even that was tough, as four contestants tied for second place. But ‘ChrisBill20’ was closest to the total on the MNF game with 48 points. The Raiders victory did go over the closing over/under of 47.5 and ‘ChrisBill20’ fought off competitors who were very close, with 47, 46 and a pick that went over.

‘ChrisBill20’ cashed for a $100 free play at Looselines.ag to use in their reduced juice sportsbook. LooseLines has been around for over 20 years, starting in Antigua and moving to Costa Rica several years ago. They have great reduced juice offerings and hopefully ‘ChrisBill20’ can cash in on the no-deposit free play.

Every week the prizes change from Free Bets to use in Live Wagering at MyBookie, to free teasers and parlays at BetPop and BetMania. Last week, ‘Husker POWER’ cashed in a free bet to use in the BetOnline OddsBooster.

It’s not to late to enter the OSGA Progressive Pick ‘Em. The season contest will most likely be out of reach after this week, but players can always vie for and cash-in on the weekly free sportsbook betting prizes.

Congratulations again to ‘deanna61’ and ‘biglakeshow’ for a huge effort in Week 2 of the NFL season. The Progressive Pool resets again to $100 and will continue to grow throughout the season. Lets hope it goes a few weeks this time and gets to a nice sum for one player. If not, the craziness of 2020 will continue to rear its head in the NFL Pick ‘Em.