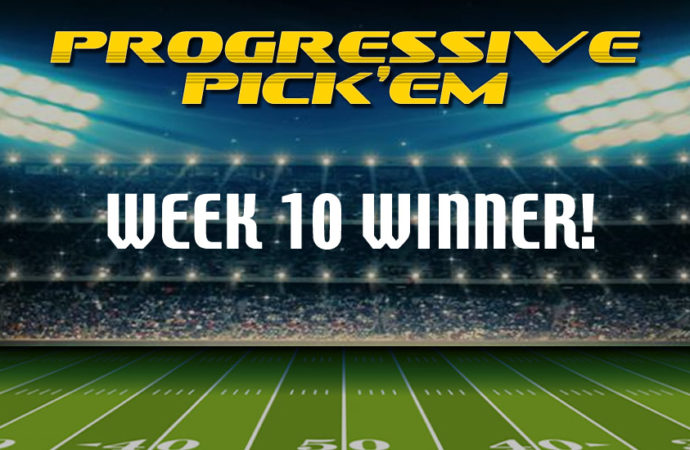 The OSGA Progressive Pick ‘Em has again been hit in Week 10 of the NFL season.

After the 2020 OSGA Progressive Pick ‘Em was hit in Week 2, we thought that this was the year the contest just gets pummeled! But no one hit the OSGA Pick ‘Em for 8 more weeks, until this week. ‘Texas Warriors’ hit the Progressive Pool with a perfect 1500 point score, outdueling the entire field. 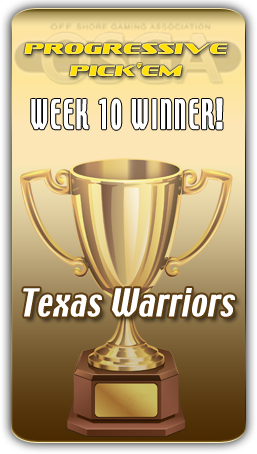 The OSGA Progressive Pick ‘Em is again the featured Free NFL contest on OSGA.com, with over 150 participants and thousands in cash and prizes up for grabs. Each week players pick all of the NFL games on the board straight up, with no point spread. Both a season-long contest and a weekly contest, the progressive aspect of the contest rewards players who can pick all of the games on the board correctly, straight-up, with no point spreads. Each week the pool builds by $100, so after getting hit in Week 2, the Week 10 prize to sweep the board was $800. According to the contest rules, ‘Texas Warrior’ will get an $800 cash prize.

“We thought this was going to be the year where the Progressive Pool was hit over and over again”, said OSGA top man Jim Quinn. “But we were wrong and with just a few weeks left in the season, it got hit again.”

Players have to keep firing picks for the Progressive Pick ‘Em, not just for the cash pool that builds every week, but for the weekly prizes from online sportsbooks for the top score of the week. Top sportsbooks MyBookie, BetOnline, BetMania, BetPoP and Looselines have given away free betting prizes throughout the first ten weeks and with a prefect card last week, this week BetPoP.lv is again offering a $50 3-team parlay to use on their excellent parlay odds.

It’s not too late to enter the OSGA Progressive Pick ‘Em. The season-long contest is out of reach for any new player, but players can always vie for and cash-in on the weekly free sportsbook betting prizes.

Congratulations again to “Texas Warriors” for a huge effort in Week 10 of the NFL season. The Progressive Pool resets again to $100 and will continue to grow throughout the season. If there are no perfect cards before the end of the season, the prize pool for distribution to players who have the most total points in NFL Pick ‘Em will be at $700.

Head to OSGA.com today and get your picks in for Week 11.