Hartley examanies other U.S. gambling legislation and how it impacts the Supreme Court ruling to repeal the Professional and Amateur Sports Protection Act.

The Wire Act and the UIGEA may also face legal challenges

In the next couple of weeks, I will be writing a series of articles on the Supreme Court decision to repeal the Professional and Amateur Sports Protection Act (PASPA) and the effects that decision will have on states, gamblers, offshore sportsbooks and the U.S. economy.

Today’s article looks at other gambling legislation and how it impacts the Supreme Court ruling.

The decision by SCOTUS to repeal PASPA was met with approval by the more than 20 states that either have passed sports betting legislation or have bills on the table to study the option. Sports bettors are obviously pleased too, but the repeal may not be enough to make a huge difference. PASPA was clearly an impediment to states being allowed to introduce sports betting legislation and regulation in the manner they like, but it wasn’t the only law on the books constraining them. The Wire Act and the UIGEA are still on the books and those laws could potentially limit the offerings states can introduce and it could very well constrain their ability to successfully balance action.

The states and gambling entities see huge dollar signs from sports betting, but unlike casino games, where there it is a game of chance and the payback amount is fixed, sports betting involves skill and hence, there is a risk. One often hears about sports betting companies in Europe that suffer a large quarterly loss due to either an overwhelming number of favorites that win in soccer or basketball or a massive long shot that eats their profits. When Leicester City won the Premiere League Championship at 5,000 to 1 odds two years ago, some books reeled for months. In fact, it was reported that William Hill and Ladbrokes had to make their largest payouts in history and it took months for the companies to regain profitability. Plus, sports betting is not a huge money generator stateside. Sports betting is by far the lowest revenue generator in Las Vegas among gambling options and consequently several Las Vegas casinos are either shrinking the size of their sportsbooks or eliminating them altogether to make room for the far more profitable slot machines and gambling tables. 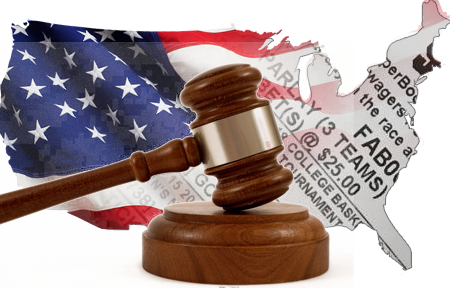 To answer why the Wire Act and the UIGEA could be a hindrance to states let’s examine the history of these two laws. The Interstate Wire Act of 1961 was passed to provide police a law to stop mobsters and criminals from using the telephone and telegraph to take bets from clients, so the law was written as follows:

After the Internet was created as a meaningful means for communication in the 1990s there were court challenges as to whether the Internet qualified, since it was wireless (albeit placed with a wired computer). That was resolved in 2002 by the United States Court of Appeals, Fifth Circuit, which ruled that the Wire Act applied to the Internet as well, in the famed MasterCard case. In that opinion the courts contended that the Wire Act was meant to apply to any device that can transmit bets and gambling information and whether the device used to transmit wagers actually has a wire or not is irrelevant. The same court also affirmed that the Wire Act was only meant to apply to sports betting, which riled the Department of Justice (DoJ), who disagreed with the courts and contended the Wire Act should apply to all forms of gambling. Moreover, the DoJ suggested the Internet is interstate in nature, so even bets placed online within a state should be illegal.

In 2012, the DoJ under the Democrats issued their opinion that The Wire Act only applied to sports betting, which finally confirmed the Circuit Court's opinion and opened the door for states to run online casinos and poker. But despite challenges to its constitutionality, the Wire Act is still the law of the land as written and thus technically disallows sports betting via phone or internet. So, no doubt there will be a push by some anti-gambling legislators to demand that any sports betting that is now legal as a result of SCOTUS repealing PASPA take place only at land-based facilities and not online. That will be okay for New Jersey, which plans to offer sports betting at racetracks and Atlantic City casinos, but other states, including Pennsylvania, have introduced laws that will allow mobile and online sports betting. Under the Wire Act this could be disallowed, which would be a huge blow to states and others who believe the real money in sports betting is online.

The one saving grace for states that want to introduce online sports betting is that the Wire Act is not the only law on the books related to Internet gambling. In 2006, the feds passed the Unlawful Internet Gambling Enforcement Act (UIGEA) which made it illegal for banks to process transactions for illegal forms of gambling. Illegal gambling was said to include all forms of gambling except fantasy sports, lotteries, horse racing and gambling which occurs exclusively within the borders of one state. As a result, the states can still technically offer online sports betting, provided it is completely intrastate, if they can successfully argue that the UIGEA supersedes the Wire Act. There are differing opinions by lawyers if that is indeed the case. But what is absolutely clear from both laws is that any bets that cross state lines are illegal.

As such sports books will be required to put in measures to ensure all bets are placed and processed completely within the state and this requirement will disallow legal state authorized sportsbooks to offset action with a sportsbook in another state, even if it is owned by the same entity. So, MGM in New Jersey, for example, will be unable to lay off heavy action on the New York Giants with the sportsbook at MGM Las Vegas that may be getting heavy action on the Giants’ opposition. In Europe and Australia as well as offshore, the ability to balance action in this way is imperative. In fact, it is just understood and accepted that sportsbooks all around the world have accounts with the Betfair Exchange that they use to help offset heavy one-way action. But under the wording of the Wire Act and the UIGEA, even communicating by phone, text or social media between states could technically be breaking the law if it is sports betting related.  Also, it’s uncertain if it will be legal for sportsbooks in states to acquire sports betting related information (e.g. betting lines) from an entity in another state, although lawyers I spoke to said this concern was already addressed and resolved.

So, there are several contradictory laws on the books and Congress will now have to decide if it’s best to leave them as is or whether they should somehow consider combining them into a single, more coherent law. They may also want to look at a new sports betting law. After all, SCOTUS effectively told Congress that if they want to introduce new legislation on sports betting that is their prerogative, but PASPA must be scrapped because it’s unconstitutional. And there are some Republicans in Congress that feel beholden to Sheldon Adelson and others that want a new law introduced that stops all Internet gambling in its tracks. Still, others in Congress may want a new law that permits all forms of online gambling so that all decisions on gambling are left up to the states and presumably would prevent any partisan bills like RAWA from being introduced again.

I asked Larry Walters, a first amendment attorney specializing in gambling if he believed a challenge to the Wire Act and UIGEA is likely and whether a new law by Congress may be in the works. He said it is possible:

In the next article I will look at the PASPA ruling and discuss what effects it may have with offshore betting.