Who is the NFL Fooling With New Stadium Wagering Lounges?

In not admitting they approve of wagering, this week the NFL announced their plan to build lounges in several NFL stadiums to accommodate online wagering and welcome new revenue sponsorship.

Stealing space from their collective bargaining agreement and the upcoming Indianapolis combine, the NFL attempted to make the quietest press release possible, announcing select stadiums will build special lounges to accommodate new legalized sports betting with a big BUT. That is, no wagering kiosks or windows will be present to handle bets or exchange any cash for NFL football or any other type of sports wagering.

Simply put, it walks like a duck and quacks like a duck, but not be an actual duck in the eyes of the NFL for now.  In their twisted vision of hypocrisy, this provides NFL fans visiting the stadium of a "social atmosphere or meet 'n greet" to discuss sports wagering while having the opportunity to watch out of town NFL games, etc.

However, having the use of your cell phone or perhaps tablet device provides the opportunity to connect to your favorite sportsbook accepting your wager. Naturally, representatives from officially sponsored sportsbooks will be present to cordially guide you on how to sign-up with their company, offer incentives, teach you the ropes, whatever. Think of it as the convenient bookie library . . . at the game.

What you won't get is a personal appearance or for that matter a video tutorial from NFL Commissioner Roger Goodell welcoming you to the lounge. Roger has continued to cement his position as the USA's all-time least liked sports commissioner. This week he continued to hide behind admitting the NFL will always reluctantly accept their Supreme Court loss reversing PASPA (the Professional and Amateur Sports Protection Act) back in May 2018. However, like all other NFL initiatives, they will gladly welcome the opportunity to accept millions of sponsorship revenue dollars by building wagering lounges in their stadiums.  Kind of like "if you can't successfully sue em', join 'em".  And happily, take their money as well.

NFL Chief Strategy and Growth Officer Chris Halpin explained that the betting lounge offering, open to franchises whose stadiums are in jurisdictions where sports gambling is legal, will showcase mobile betting options.

He stated: "We're allowing betting lounges. Like daily fantasy lounges today, in an adult, discreet area. There will be a betting setup, but we're not going to have betting windows." 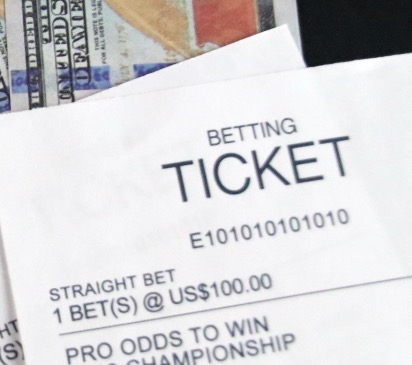 As a result of the league's new policy, NFL franchises can now designate official sportsbook sponsors and display signage in stadia with some restrictions. For example, the word sponsor needs to be included in reference to sportsbooks, and sports betting signage remains prohibited in the lower sections of the venues.

For now, expect instant construction in four states that currently mandate legislated online sports betting including New Jersey, Pennsylvania, Indiana and Nevada. That means a "discreet, adult social opportunity" for football fans to congregate in one space. Watching games and wagering in cyberspace at stadiums housing the Eagles, Steelers, Colts, Jets, Giants and Raiders during this upcoming season. Many more states housing NFL teams have online sports wagering on the docket including the District of Columbia, Tennessee and Illinois. This week's announcement offers a serious catalyst moving actions forward.

This is the type of big bucks bonanza the AGA (American Gaming Association) promised the NFL in their 2018 report after PASPA was reversed and sports wagering was again offered to individual US states. The AGA estimated over $500 million dollars could be ancillary generated on spending by betting operators and data providers. This stadium lounge project is likely only the beginning. And if successful, it offers the opportunity for more advertising revenue throughout stadiums. But for now, the edict restricts sponsorship and advertising within these lounge confines.

As for the NFL naming official sponsors, the titles are somewhat confusing and hazy. Last year the league designated DraftKings as it's Daily Fantasy Sports Partner while they were still vehemently opposed to traditional sports wagering. We can assume they will be welcomed aboard as a premier partner occupying their current front runner place in online sports wagering, especially in Pennsylvania and New Jersey. The NFL has already named Caesars Entertainment its Official Casino Partner. Therefore, it's expected they will be extended a VIP pass as well in line.

Overall, it's likely several prominent casino industry and sportsbook names will have banners, electronic signs and personnel on-board if they are willing to pay NFL first round money.

Although this seems like a progressive step forward for the league and bettor convenience, let's take a pragmatic look at a typical upcoming NFL Sunday scenario:

Dad (over 21) has invested about $500 to join his two young sons at Lincoln Financial Field in Philadelphia for a major Eagles-Giants game. With 3 minutes to go in the first half, he tells sons Billy and David he needs to visit the bathroom, and he'll be right back. Do they want a hot dog for when he returns?

Actually, dad is sneaking off to the "FanDuel Online Lounge" to see if gets a first half cover in the Redskins-Jaguars game. Maybe put down a live prop bet on his cell for the last two minutes of the half. Or enter his second half wagers without distraction. And assuming there are 50 high-def screens showing the Eagles-Giants game, he really misses nothing for those potential wagers.

No doubt he could pick up a $12 beer while on hand. Or perhaps the $7 hot dogs he promised the kids. Hey, maybe even a discount for being a FanDuel or whoever official lounge club member? Plus, I would have to believe these lounges would have their own excellent cell-signal rest rooms for dad, IF he honestly had to relieve himself. Touchdown!!

In summation, I don't want to be a killjoy against fun, progress and technology. But wouldn't any loyal football fan who seeks this potential game plan ask themselves why are they investing hundreds of dollars in game tickets, parking, etc. to forget why they came out in a cold stadium? What about the live experience?  Isn't your home living room, the best "lounge" possible?

Even worse, say the Eagles win but dad angrily walks out of The Linc with several unplanned losing online wagers. Yup, like every NFL Sunday, the NFL always wins. Now, they just found another very profitable, risk-free way to do it.