What does Adam Silver's stance on legalizing sports betting mean for the future?

Harltey examines what it would take for the pro leagues to embrace sports betting.

The sports betting industry was all abuzz last week when NBA commissioner Adam Silver suggested in a New York Times' op-ed piece that the league's opposition to sports betting may be ill advised and that states will likely start offering sports betting anyways since they are broke and looking for any revenue tools. Silver said that he wanted a federal framework for sports betting that would allow states to offer betting on NBA games but only under specific criteria set out in the framework. Dallas Maverick's owner and Shark Tank venture capitalist Mark Cuban supported Silver's comments suggesting that Silver's comments only make sense.

Not surprisingly the other leagues tried to distance themselves from Silver's comments with NHL Commissioner Gary Bettman stating that he couldn't envision the NHL agreeing with Silver and that betting would change the dynamics of the sport. "Do you want people at basketball and football games rooting for the spread?" Bettman asked. And NFL spokesman Brian McCarthy said that Silver's comments don't reflect the NFL's decades old stance and that as far as he's concerned there will be no legal gambling on NFL games (outside of Las Vegas). That said Roger Goodell, the NFL commissioner, never made a comment and when he was asked about betting on NFL games earlier this year Goodell only said that he didn't envision the NFL's stance changing any time soon. He added, however, that the NFL welcomed fantasy sports leagues on NFL games which he claims is a skill to enhance interest in the game and is different from sports betting. In fact it appears that all leagues welcome fantasy sports and most even promote it. No one from Major League Baseball or the NCAA commented. 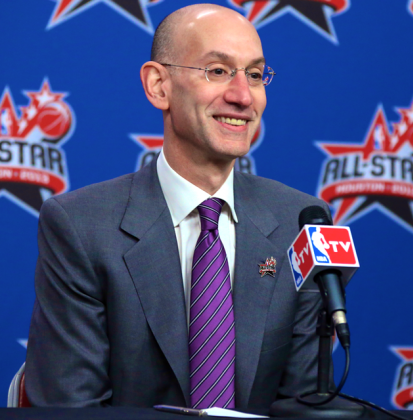 What were more telling that Silver's comments in the New York Times piece were his comments on Mike Francesca's show on CBS radio the following day when Silver suggested that his op-ed piece was designed to move the ball forward and garner some discussion on the issue. But he also stated that he was hoping the league could benefit from sports betting the way the soccer teams do in the English Premiere League in England. So reading between the lines, Silver is saying "if we agree to allow betting on the NBA then what's in it for us?" And no doubt the other leagues are probably wondering the exact same thing.

Regardless of what McCarthy, Bettman or Goodell feel personally, the team owners are the ones who really control the decisions of their respective leagues and if enough money is put on the table there is no doubt that the majority of other team owners will issue comments similar to Mark Cuban's. Moreover the leagues need the money. The NBA is obviously throwing the idea out there because interest in NBA games has been dropping rapidly and they want some supplementary revenue and while Bettman wants to pretend the NHL is healthy and thriving, this is only true in the traditional northern markets as well as in California. The Florida Panthers along with the New York Islanders, New Jersey Devils and Arizona Coyotes are on virtual life support and the Buffalo Sabres only draw well when they can entice people from Canada to attend their games. And at various times Pittsburgh, Columbus, Tampa Bay and Nashville have been in big loss positions. And while the NHL has potential to grow in Canada, Bettman has made it fairly clear that he believes the NHL can only thrive if it grows stateside and not in Canada. So if sports betting can keep some of these teams from folding he has to at least entertain the idea, especially if the owners dictate to him to do so.

As for the NFL they have no right to take a moral high ground on anything. When a league harbors spousal abusers, child abusers, animal abusers, drug users and just generally violent people it's hard for them to take the high ground with sports betting. Fans won't allow it and whether the league wants to admit it or not much of the NFL's success is predicated on betting. Studies in the past have shown that if betting was truly disallowed on NFL games interest in non-local games would drop by at least 50%. It's also the main reason the NFL has never tried to stop point spreads on NFL games from being published in media outlets nationwide. Their objections to betting on NFL games have always been superfluous and the majority of fans and Congress know it.

The one wildcard in all of this is the NCAA. PASPA was originally introduced because the NCAA was worried about game fixing and they were concerned that if students could wager legally on games in their states, the risk/reward could be too hard to resist, especially by players that had no chance of turning pro. The NCAA was hoping that PASPA would be applied to Nevada also but Congress realized that for the law to pass they had to grandfather in Nevada which was offering betting on NCAA games for decades. So for a league that has been so vocal in its opposition to betting on its games to suddenly forego its opposition is unthinkable. How can a league that has spent decades telling their students "don't bet on it" and actually penalizing students who are found to be wagering on games all of a sudden come out and say they're ok with it now? And because there are no owners in the NCAA, the league won't have the same pressures put on them to investigate the potential revenue stream the same way the pro leagues will.

I asked Larry Walters, a first amendment attorney that specializes in gambling if he foresaw any legal challenges if the pro leagues chose to ask the courts to legalize sports betting federally:

"There is no overt legal problem with the teams dropping their opposition to sports betting. However, their own arguments may hamper the public's acceptance of the teams' direct involvement with the activity, for the time being. Since the teams have expressed continuing opposition to the concept
of sports betting, based on its negative impact on the integrity of the games, it will be difficult for them to suddenly reverse course and begin participating in the activity, or publicly endorsing it. The deals may be forced underground, or be separated by various layers of corporate interests. But eventually, enough time will go by and the public will sufficiently embrace sports wagering to the point where the teams can actively participate in the activity."
I also asked Walters if he foresaw any way that PASPA could be amended to allow for legal wagering on pro sports while keeping college games illegal and what it would entail:

"PASPA would theoretically need to be amended for any state, other than the grandfathered states, to engage in sports betting of any kind. As you know, there is a constitutional challenge to the law, but it is still a valid federal statute. The pending NJ legal challenge appears to be a long shot. So (for PASPA to be amended), Congress would need to act to permit new states to engage in sports betting. An amendment to PASPA could prohibit betting on NCAA games, while authorizing betting on pro sports. That may make the legislation more palatable to the leagues. The DOJ would not be able to unilaterally 'interpret' PASPA to permit sports wagering in new states, whether pro or college. Since PASPA has been held to preempt state laws dealing with sports betting, only an amendment to the federal statute, through the usual lawmaking process, would accomplish any change to the status quo. The leagues could lobby Congress to include a prohibition on NCAA sports wagering. Such a prohibition would almost certainly be within the legislative power of Congress, as a rational regulatory distinction between types of gambling activity. "

One analyst I spoke to suggested that the leagues may want to drop their opposition to PASPA on pro sports and keep college betting illegal as a way to "shame" Las Vegas into dropping NCAA games from its bet offers:

"If a federal law makes amateur sports betting illegal everywhere including the 3 states besides Nevada that were grandfathered into PASPA then Las Vegas may have no option but to drop betting on college games. If they didn't then the state would look like pariahs. Obviously Illegal bookmakers will continue to offer university games but you can't worry about what's done illegally." The analyst did note, however, that Nevada is still the only state that legalizes brothels and prostitution so it would be hard to shame them into anything.

One obvious question that has to be asked is what it would take for the pro leagues to embrace sports betting within a legal federal framework. There's no question the leagues will want to block individuals involved in the industry from wagering on their sports and in today's computerized world that would be fairly easy. Online companies have told me that they have cancelled player accounts and blocked IP addresses for several reasons including collusion in poker games, clear compulsive wagering, indications of underage wagering and attempting to use proxies from countries that are banned. So identifying an employee of a league that is trying to wager on their own sport through databases would be easy. If Pete Rose wanted to bet on baseball games today he would be noticed much more quickly than in the past, I've been assured. The leagues will also probably want certain types of wagers banned and they'll almost certainly ask to be informed in cases of suspicious wagering. In fact the NHL already has a memorandum of understanding in this regard with Betfair. But, most of all, the leagues will want a percentage of the winnings. How much that will be is uncertain but they'll probably demand that bets on all sports are separated so winnings can be apportioned correctly and the amount will be a percentage of gross profits.

On Thursday a hearing is being held to discuss judge Michael Shipp's restraining order which prohibited Monmouth Park from offering sports betting last month. The hearing will determine whether the ban should be extended and spokespeople for the NBA, NFL, NHL, NCAA and MLB will be stating their cases. While all the leagues will be asking for a continuation of the injunction there's no question the wording of the arguments from each league will be telling on what direction each league is prepared to take in the future. OSGA will be providing an update and comments on the hearing once it concludes.