Toronto Area Casino All But Dead

In 2011 Ontario Lottery and Gaming (OLG) announced a plan to modernize the way it would be delivering gaming to Ontario residents due to reduced lottery play, increased play at Internet gambling sites and competition from casino operators in neighboring provinces and U.S. States. The plan called for the introduction of Internet gambling, the cancelling of a racetrack-slots program and the introduction of new casinos in areas that aren't currently being serviced in the province. Those areas were divided into 29 zones including three in the Greater Toronto area. Zone C2 was to provide a smaller casino at Woodbine racetrack, zone C3 was to provide a smaller casino in the suburb of Durham Region just east of Toronto and the crème de la crème was a C1 casino to be built either in the downtown corps, the western suburb of Mississauga or in the northern suburbs of Markham, Vaughan or Richmond Hill. Of those options, downtown was clearly the choice of all casino operators who saw dollar signs with the opportunity of creating a large resort casino in the fourth largest city in North America. 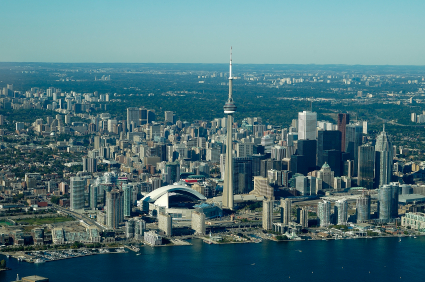 OLG asked for requests for information and bids from casino operators and they weren't disappointed. MGM was the most exuberant pushing for a casino at the Exhibition Grounds while Caesars, the Sands and Oxford Properties made a push to get a casino built at the Convention Centre, which is located between the Air Canada Centre and the Rogers Centre. All the companies poured vast amounts of money into their bids and MGM even went so far as to put on a mock job fair to show the general public what type of jobs could be created with their vision. In the end it was a moot point. The casino naysayers, including the majority of the Toronto Council, had no intention of ever approving any Toronto casino and OLG rules stated that it would not force a casino on any city that didn't want it. In the end, council voted overwhelmingly to reject a casino both downtown and at Woodbine racetrack.

There were several reasons why the largely-left-leaning Toronto council voted against the casino but the main reason was that it didn't fit their vision for the lakefront, which they naively believe will be built up into green spaces without the use of taxpayer money. Most also indicated they oppose increased gambling on moral grounds. There were, however, other political issues at play as well. Mayor Rob Ford became the centre of numerous scandals and has been at odds with many of the left leaning council, even leading to outgoing councilor Kyle Rae stating that "he would be a mayor in name only" if he were elected. Consequently the Toronto council became an "us vs. them" arrangement, with the mayor and his allies on the "us" side and the majority of other councilors on the "them" side. So when Rob Ford announced that he supported a casino it immediately caused councilors like Adam Vaughan and Craig Perks to take the other side and unfortunately for Toronto their voices and votes were stronger than Ford and his allies.

Provincially there were issues as well. Premiere Dalton McGuinty resigned in the middle of the bid process amid scandals involving health care, medical helicopters and cancelled gas plants and Kathleen Wynne (who was vocal about how much she hated gambling and wouldn't give the city any special deals) was voted in as McGuinty's replacement. OLG Chairman Paul Godfrey offered a deal to Toronto anyways which Wynne didn't approve of and Wynne fired Godfrey stating irreconcilable differences. With that firing other OLG managers resigned as well. As a result, the whole modernization plan of OLG was thrown up in the air and the casino operators were left confused and frustrated.

In early 2013 Toronto officially voted not to host a casino which then handed the ball to the other surrounding communities in the C1 zone. Mississauga stated from the beginning they didn't have the space or infrastructure to host a casino, while Markham stated that they didn't have the land either and voted 9-4 not to host a casino. Ironically in that meeting where Markham voted not to host the casino, Markham mayor Frank Scarpitti stated that he believed the city of Toronto had made a huge error in judgment not to host the casino, since it would have benefitted them greatly and they were the only community with the infrastructure to offer one properly. Richmond Hill, which was also on the list, never took a vote one way or the other, although they always indicated they didn't believe it was feasible, while Durham Region said they were still interested in hosting a casino, although the plan by OLG was to provide a smaller casino, which likely would have just expand Ajax Downs' current slots setup. The one city that still had an interest in hosting a casino was Vaughan and in a long late night session they voted 5-4 to host a casino. The Sands indicated they had no interest in pursuing a Vaughan casino while MGM and Oxford Properties seemed much more interested in the opportunity with an MGM spokesperson even saying that the company could probably make more with a resort casino in the suburbs than downtown, although downtown was still the top choice. That bid, however, was put to rest recently when Vaughan took another vote and this time voted 5-4 not to host the casino. So with all the C1 casino cities stating they no longer had any interest in hosting a casino . . . the Toronto casino issue is officially dead.

"I believe this mess will cost the province in potential developments for years to come."

It should be noted, however, that Durham Region is still interested in hosting a casino and talking to councilors in Pickering there is the possibility they could ask OLG to move them into zone C1, since none of the other C1 cities showed an interest. If this were to occur, it could generate some new interest by casino companies. If the plan is just to expand Ajax Downs there naturally would be no interest, but if the councilors in Pickering were to get their way and develop a large resort casino in Seaton or near the lake it could prove very profitable. Aside from having the land and infrastructure, Pickering is located on two major thoroughfares and is only about a 30-45 minute drive from downtown Toronto. The federal government also plans to build an international airport in northern Pickering within 10 years and the nuclear power plant, which is what put Pickering on the map, is scheduled to close within the next few years. Without the power plant, the city will want to see new jobs created of which the casino could be a major opportunity and tourists will likely consider Pickering a more interesting option without the hesitation that nuclear power often generates.

I asked a spokesperson at the Canadian Gaming Association and spokespeople at the major casino operators for a comment regarding the fact that all C1 cities have officially pulled out but none had any comment to provide at this time. A manager from a major construction company that stood to win its own bid, however, was quite upset and was willing to talk to me off the record just in case the city changes its mind in the future.  He stated that he was extremely frustrated with both the city and province because in his view the casino operators and all the spin off companies were sold a bill of goods.

"We all went into this process with great expectations and an understanding that one of the listed cities would build a resort casino and were shocked at all the games and politicking that went on. The "no casino" groups that came out in force at Toronto and Vaughan meetings were ignorant doomsayers that wouldn't know a good deal if one hit them squarely in the face. I doubt many of them even have jobs let alone ever created one and the only ones that suffer from their ignorance are unemployed Torontonians. It was irritating to be shouted down by them constantly and it was more irritating to see the time and attention given to them by the city politicians and the media. Toronto lost out greatly in the process and hundreds of potential construction workers have to still look for work because of the city's ignorance. But the one thing that bothered me more than the politicking at the city was the politicking by the province. First they were on board to build casinos where they deemed fit, then they weren't on board and required council approval. First they were asking for RFIs, then they weren't sure if they really wanted any. Cities were moved into different zones like a rollercoaster and nobody knew who was in charge or where they stood, particularly when the government changed its whole view on building casinos midstream. It was a disorganized clusterf*ck and I wouldn't blame any casino operator that tells the province and the city of Toronto where to go the next time they entertain the idea of another casino. For that matter I believe this mess will cost the province in potential developments for years to come because Ontario and Toronto in particular are viewed as one big mess where no one can tie their own shoes without the permission of 30 or more politicians."

While no one from a casino would talk on the issue right now, one of the casino operators did tell me during the bid process that he was frustrated by the pettiness and games being played by the politicians. He noted that casino bids worldwide are always difficult and the casinos constantly have to answer to the public and city councils on issues like problem gambling, parking, public transportation and safety but Toronto was different because they also had to deal with all of the infighting. He also noted that like Toronto, his casino company put in millions in bids to land a casino in a major European city and in the end that city's council voted not to put one up leading his company to question why they were asked to bid in the first place.

So what's next? I suppose it all depends on whether Durham region is interested and successful in convincing the province to put them into zone C1 but barring that it appears the Greater Toronto Area will continue to be casino free for the foreseeable future. And unfortunately the 10,000 jobs the casino was going to create will be lost for good as well.