FairwayJay looks at heavy favorite Tiz the Law and his chances of winning the 2020 Kentucky Derby and going to post at Even Money.

Tiz the Law will be the prohibitive favorite when the morning line odds are released for Kentucky Derby 146 on Tuesday, Sept. 1. He'll be less than 2/1, and Tiz the Law could go to post on Saturday, Sept. 5 as the shortest favorite in more than 25 years.

In an unusual and unsettling year of the COVID-19 crisis that includes the Triple Crown races being contested out of order, Tiz the Law has been a steady influence and undefeated champion in 2020. The son of Constitution trained by Barclay Tagg and ridden by Manny Franco is 4-for-4 this year with major race wins in the Florida Derby, Belmont Stakes and Travers Stakes - all by at least 3 1/2 lengths as the betting favorite. 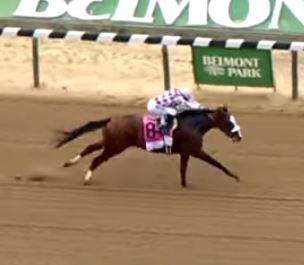 Tiz the Law has given horse racing it's own definition of 'social distancing.' He will do that on the odds board for the 2020 Kentucky Derby as well. Will Tiz the Law go to post at less than Even Money in a 20-horse Kentucky Derby field?

Over the past 25 years, the shortest-priced Derby favorites have been:

In 2011, Uncle Mo would have been a shorter favorite, but he was scratched prior to the race.

Racing luck and larger Derby fields with the potential of more traffic trouble still plays a part. So could weather and a sloppy or off track. No fans or spectators at Churchill Downs for the 2020 Kentucky Derby will make for a very different feel and broadcast of the event as well.

But this year's race has a different complexion due to the COVID-19 health crisis. The Derby was moved from May 2 to Sept. 5. The horses are entering with more experience, and some have already run well at the 1 1/4-mile distance, including Tiz the Law when winning the Travers Stakes by 5 1/2 lengths. Travers runner-up Caracaro is improving and will try to win the Derby as a big longshot for his connections and sire - Uncle Mo.

While the more recent Kentucky Derbys have seen some of the shorter-priced favorites prevail, it's still usually more risk than reward when wagering to win on the prohibitive favorite. Keying the favorite and a few other horses can pay off better in Exacta, Trifecta or Superfecta wagering.

That proved especially profitable in the 2017 Derby when favorite Always Dreaming (9/2) won the race and longshots Lookin At Lee (33/1) and Battle of Midway (40/1) finished second and third.

The Kentucky Derby field has been limited to 20 starters since 1975. At least 20 horses have entered the race since 2004, and the Derby has had at least 18 runners in the race each year since with more than half those years horses being scratched before the race.

Hopefully Tiz the Law stays healthy and is not scratched so fans can enjoy the race in what could be another record handle for the Derby, with bettors backing Tiz the Law. Last year's Kentucky Derby weathered through a steady late-afternoon rain and the disqualification of the favorite Maximum Security, who crossed the finish line first. But huge longshot Country House (65/1) became the Kentucky Derby winner in a race that saw the all-sources betting handle reach a record $165.5 million.

I won't be betting Tiz the Law to win America's biggest horse race. But you can watch and wager on the event at leading online sportsbooks. The Run for the Roses and "most exciting two minutes in sports" airs live nationwide on NBC on Saturday, September 5, 2020 beginning at 5:00 p.m. Post time for the Kentucky Derby is at approx. 6:50 p.m. ET.

I'll find a way to wager a bit on the Derby looking for a score. Art Collector may make my Derby Dreams this year.