Quebec is making a mockery of problem gambling and of the Canadian constitution with the call for ISPs to block online gambling websites that aren't part of the government monopoly.

Hypocrisy and gambling is nothing new.

U.S. governments have made a fortune off lotteries, horse racing, land based casinos and recently online casinos, but they absolutely refuse to seriously deal with the 15-year-old Antigua/WTO issue. Antigua stated it will finally start using the copyright award it was given in 2007 by the WTO since the USTR is still claiming that Antigua's desire to benefit from gambling off U.S. citizens has to be blocked for "moral reasons", despite the growing number of states now offering legal online gambling. As well, Sheldon Adelson has made a fortune off Las Vegas Sands casinos worldwide but is still trying to overturn laws that now permit online gambling for similar "moral objections". And Indian groups in California are still holding up the passing of a poker bill because of stated "moral concerns" relating to PokerStars and other 'bad actors', despite the fact the Native American groups are making a fortune on their own casinos and several of those groups are trying to set up agreements with these same bad actors.

And worldwide, the hypocrisy is really no different.

Germany still refuses to issue online casino licenses and only limited online sports betting licenses despite the fact the country makes a fortune off all forms of gambling; France still refuses to allow foreign companies to challenge its gambling monopoly and the Chinese government still disallows any gambling in China, although they rake in money from Macau, and as we have seen with the recently resolved Steven Jacobs case, they do so with questionable tactics. In the end of course it all comes down to protecting the monopoly and ensuring that the government gets as much money as possible from gambling companies. If they can't do so, they try and make it as difficult as possible for gamblers to play at free market places instead of at a government site. Despite anti-monopoly laws, the governments and some operators realize that the easiest way to ensure that their cash cow won't be milked is to stop anyone else from legally competing against it. And somehow they seem to equate protecting a monopoly with acting morally and reasonably.

One government, however, has risen to the top in terms of not only hypocrisy, but outright gall. And that is the government of Quebec, in Canada. What the Quebec government is planning to do would almost be laughable if it weren't real.

Since its inception, Lotto Quebec saw very poor results at their online gambling site Espacejeux.com and claimed that the disappointing numbers were due to free market websites cutting into their pie. And to a degree they were correct. The free market or offshore sites offer much higher payouts than the Quebec government site, they offer better bonuses, a more relaxing environment to play, a larger variety of games and the ability to play on mobile. But that wasn't the only reason the Espacejeux.com site has been unsuccessful. Many pundits have pointed to very poor management at Lotto Quebec and a horrible marketing strategy. Nevertheless, like their American counterparts they decided that the solution to their woes is to block the offshore websites from competing. As such last year they introduced a bill into the budget called Law 74. The relevant section relating to gambling is as follows:

To monitor online gambling, the Consumer Protection Act is amended to require Internet service providers to block access to illegal gambling sites entered on a list drawn up by the Société des loteries du Québec, which must report to the Régie des alcools, des courses et des jeux if service providers fail to comply with the Act. The Régie will be responsible for informing service providers of their non-compliance, and the president and chief executive officer of the Société or a person the latter designates is granted investigation powers to ensure compliance. 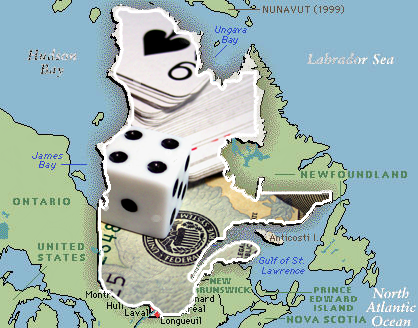 The law was passed in May of this year and the fine to any ISPs that fail to comply with the blocking orders is $100,000 per incident. Plus, the ISPs are expected to absorb the cost of blocking the sites which the ISPs say will be significant. Ironically it's not much different than what the U.S. government did when it passed the UIGEA and effectively told the banks to figure out a way to block illegal transactions and absorb the costs without giving any direction of how to do so.

The Canadian Wireless Telecommunications Association, whose members include the largest internet providers in Canada, Rogers, Bell Canada and Shaw, have issued an objection to the law claiming it is unconstitutional, since telecommunications falls under federal law and not provincial. Moreover, they claim it violates the freedom of information laws in Canada. The Quebec Minister of Finance, however, Carlos Leitao, claims it is constitutional because this amounts to a "health issue" which falls under provincial law. The health issue he claims relates to combatting problem gambling. So in better words the government will argue to any federal courts that gambling addicts are losing great deals of money to offshore gambling sites and this has to be curtailed by blocking those sites.

What Leitao doesn't explain, and apparently he feels he doesn't have to explain, is how gambling addicts losing money on Quebec's online gambling site Espacejeux.com is not a health issue.

To make things even more c, the government will announce its list of operators that have to be blocked, but will then try to negotiate agreements with up to three of those sites to become partners with the Quebec government! One of those sites expected to be on the new 'approved list' is Amaya Gaming and their PokerStars brand. Amaya has already partnered with Lotto Quebec in a business-to-business relationship so the expectation is that the government will work out a sweetheart deal where Quebecers can play at PokerStars Canada, as well as other Amaya games and the Quebec government will take a fair chunk of that amount. And the proof is a statement that Amaya head of corporate communications Eric Hollreiser told OnlinePokerReport:

"History shows that time and time again that prohibition does not work. We're happy to see the provincial government seeking ways to work with the private sector to contribute to Loto-Quebec's growth in online gaming, for the benefit of taxpayers and the protection of consumers."

Obviously Hollreiser wouldn't have made that statement unless he had insight that Amaya was going to somehow be a big player at Lotto Quebec, once the law is passed.

The obvious question, therefore is, how can Leitao seriously argue that it's necessary to block sites like Bet365 and Party Poker because of the risk of addiction to gambling, but it's ok for Quebecers to legally gamble at PokerStars because that somehow is not addictive. It is completely illogical. It is like saying that the government wants to ban cigarettes in the province to save smokers from getting lung cancer but that they are providing an exemption to R.J. Reynolds because Camel, Pall Mall or Lucky Strike cigarettes don't have the same health issues that Viceroy or L&M cigarettes do. At least with France they came out and openly said they will not permit foreign gambling operators because they want to protect their monopoly.

But in this instance Quebec is making a mockery of problem gambling and of the Canadian constitution. It's extremely frustrating and Quebec may just go ahead with the new law anyways, even if it is struck down by the federal courts, since the Quebec government has shown in the past that they believe in many ways they are sovereign, such as with the passing of the language law Bill 101 back in the 1970s which deemed that all signs in Quebec had to be in French only. The law has since been revised many times but initially Quebec was not going to allow English signs.

The other question is how does this affect the Kahnawake Mohawk Territory and the large gaming complex there? It's one thing for the Quebec government to try and blacklist websites from Europe or the Caribbean, but if they plan to put some of the sites run out of the Mohawk reserve in Quebec on their blacklist they could be in for a fight. The Kahnawake Gaming Commission and Mohawk Internet Technologies came about despite laws that prevent gambling operators setting up unless they are licensed by the provincial governments, but the KGC has always claimed that they are sovereign and not directed by the laws of Canada. And the Quebec government suffered a huge black eye a few decades back at Oka, Quebec when they tried to put a golf course on Mohawk land and ended up in a standoff that ended with a police officer killed. There's no doubt the Quebec government doesn't want to face that situation ever again.

I tried to contact people in Kahnawake and was informed they weren't able to comment at this time. That said, if the past is any indication the leaders in the Mohawk reserve won't simply cede to the Quebec government if, in their view, the government is attempting to trample on their sovereign rights.

So gamblers once again are seeing hypocrisy in action as governments and individuals that profit from gambling try to stop its expansion citing moral and now "health" reasons. It is becoming ridiculous and it's about time that the governments admit the truth – they want to be the only game in town and will use whatever methods are necessary to shut out the competition.

Anyone with half a brain can see it anyways.