The NBA Lines Up For New Gambling Rules

Forget about the new NFL pass interference rules causing a tiff. The biggest controversy currently making waves on and off the field is really on and off the court…the NBA court. This week, America's most forward-thinking sports commissioner, the NBA's Adam Silver tried to subtly announce a new policy affecting not only NBA teams, but NBA gamblers as well.

The NBA had a big week announcing changes, anchored by anti-tampering measures that seek to prevent a repeat of the blockbuster summer that saw superstars switch teams and form dynamic duos in what many argue as collusion. Adding on more headlines were news about fines allotted for each violation with the amount going up to $10 million in some cases. But trying to slip under the radar were the announcements about new starting line-up policies.

Previously, teams were allowed up to 10 minutes before the opening tip to have their starters made public. With the recent change, the league now requires teams to have their starters revealed 30 minutes ahead of game time. That is quite a difference, not only affecting competition and decision making among coaches, but undoubtedly anyone possibly having "inside information" for betting NBA games.

Many had found issue with teams deciding to make late changes to their starting rosters moments before game time as a clever ruse to confuse or frustrate opponents. Coaches could use the late roster announcement to obtain an advantage on matchups and also gain an edge over those teams hurt by injuries. In comparison, imagine a July Major League Baseball game where you expected Justin Verlander or Stephen Strasburg on the mound, but they didn't show up until the fourth inning.

While league officials will cite numerous reasons for the adjustment, Matt Moore of the Action Network summarized the overall sentiment held by a few league executives he spoke with in stating that, "It's about gambling. All of it." Though NBA Commissioner Silver hasn't expressed an official statement confirming it isn't true, he hasn't exactly denied it yet either.

In his official statement, he expressed the change that was passed via a unanimous vote among all 30 NBA ownership groups. Here is an excerpt of what he said, which didn't at all address any gambling reference or motivation whatsoever:

"To increase transparency for teams, media and fans, the league will now require teams to submit their starting lineups 30 minutes prior to the game's scheduled start time instead of the previous rule of 10 minutes,"

“Teams will retain the ability to amend their starting lineups prior to the beginning of the game if circumstances change. This type of change is most likely to occur if a player sustains or re-aggravates an injury during pregame warm-ups."

This change is definitely bad news to the sharp bettor, who might have taken advantage of the previous policy given some sort of inside knowledge.

As opposed to say a football or hockey game with a select few players seeing time on the court, one specific player listed as a game-time decision could easily sway the betting lines a few points in either direction depending on their status. The wagering lines at top online sportsbooks are already subject to sharp moves prior to tip-off. This extra twenty minutes creates a significant difference to those awaiting word on a key player or any player in the starting line-up for most teams.

Another ironic factor in this NBA policy change for bettors involves the ongoing political fight between betting onsite and online in the United States. Here's why:

Previously the small 10-minute window to announce starting line-ups was a distinct disadvantage to those huddled in lines at on-site casino locations. Watching the board change was frustrating to those with a small window of opportunity to get their bets in. Or perhaps a mistake waiting to happen by second guessing themselves by a last-second change in an NBA line due to a starting line-up change. 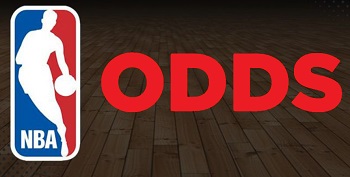 This new 20-minute addition, increasing to a full 30 minutes allows BOTH the onsite plus the online bettor more opportunity to plan their strategy and make a more confident decision. It also allows competing sportsbooks to view other action in the market, allowing for potential adjustment.

It is unlikely you will hear Commissioner Silver admit any of this reasoning when questioned, but behind closed doors with his equally experienced NBA gaming advisers, no doubt these factors came into discussion and consideration.

Come mid-March a very popular topic involving the league is the select group of three to four teams "tanking" to improve their opportunity for the next season's NBA Draft Lottery. That list has increased by another group of teams who've already secured their playoff spot by April. With only two weeks to go until the playoffs start, they have no incentive to start or play their key superstars risking injury.  It’s a perplexing challenge for many sportsbooks to set lines, allowing for balanced action. With only 10 minutes before tip-off, it increases the further problem potential setting accurate NBA wagering lines. "Starting" has often become a substitute phrase for not playing or playing a much-reduced amount of time vs. normal.

For example, before Anthony Davis was traded to the Los Angeles Lakers after last season, it was confusing to figure out if he was starting, not starting, playing or not playing for the New Orleans Pelicans in March and April. The reverse factor often happened involving Stephen Curry and the Golden State Warriors. This new rule doesn't completely solve the issue, but it certainly helps to even the playing field. Well, playing court.

Here's hoping the other three commissioners in the three major U.S. sports (NFL, MLB and NHL) pay attention to this important press release and new NBA rule. Although it isn't officially classified under "gambling legislation change" it is valuable and necessary to improve the integrity of the game for both fans and gamblers alike.