Stories surfaced this week about a potential sportsbook inside Wrigley Field and Glenn wonders just how long it will be before fans can order a hot dog and a Sox-Cubs two team parlay inside the games' most historic stadium.

Amid stories or rumors, 'the friendly confines' could include a major league sportsbook

The anything’s possible file made room for another story this week when reports surfaced that historic Wrigley Field in Chicago could house an official sportsbook location if approved by Major League Baseball.  A big IF depending on the usual combination of legal factors and several political forces.

What makes this more amazing than a 57-game hitting streak is the historic, firm stance of MLB prior to May 14th, 2018, the fateful day PASPA (the Professional and Amateur Sports Protection Act) was reversed by the U.S. Supreme Court and a new era in legalized sports wagering was ushered into the United States.  Except for NFL football, no sport was more opposed to the "evils" of wagering entering its sport than professional baseball. 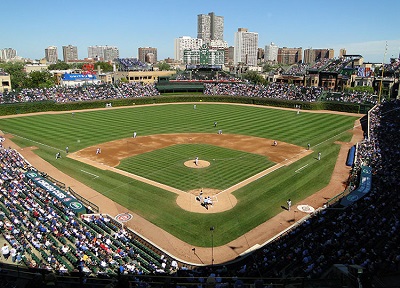 ESPN got the first whiff of knowledge here, which quickly spread this week. Betting windows, automated kiosks and potentially a full-blown sportsbook venue inside Wrigley are among options that have been considered by the Cubs and other Chicago professional franchises, as Illinois prepares to put its aggressive new sports gambling law into effect.

The biggest part of the Big IF is MLB currently prohibits sports books, including betting kiosks or formal wagering windows, directly inside a team stadium. The Cubs couldn’t take it upon themselves to make the decision. Should MLB pursue this stunning form reversal, the league would also have to review the Illinois legislation, although it’s doubtful they would receive a problem there.

The NBA has similar rules in place and, as aggressive as their progressive commissioner Adam Silver has been promoting U.S. sports wagering, no formal arena talks have happened lately. Therefore, this could be a revolutionary attempt for not only baseball, but other U.S. sports leagues as well.

Expect anti-gambling forces to come out heavily against this potential action and rightly so.

Yes, sports wagering is readily available online through our computers and smart phones, occupying about 80-90% of forecasted play into the future. But, having wagering kiosks and betting windows in stadiums where children and minors readily attend could be more than a bit controversial. It forces a casino-like atmosphere directly into the stadium that could reach no-limit, especially if proven successful.

Honestly, as a teenager I might have been coercing dad coming to the ballpark early to watch batting practice.  But if possible, sneaking away to find an opportunity to get a parlay bet on other games. Hopefully, there won’t be vendors out in the Wrigley stands with remote betting terminals. Pursuing hot dogs and popcorn may become secondary.

This is where the NFL could get involved. Though Wrigley is a baseball facility and governed by MLB rules, there has been talk about the Chicago Bears also including onsite wagering at historic Soldier Field. Under new Illinois legislation, which was supported by MLB, the NBA and multiple team owners, sports facilities with seating capacity greater than 17,000 could apply for a license to offer sports betting inside or within a five-block radius of the venues. Soldier Field, the United Center, where the Bulls and Blackhawks play and Guaranteed Rate Park, the White Sox's stadium, are venues that can apply for a master sports wagering license. Each stadium license will cost $10 million. Instant major state revenue before a first bet is made.

It’s quite unlikely Major League Baseball opens the doors for all sports to house a wagering facility directly INSIDE one of their venues. Especially, in historic Wrigley Field. However, don’t expect them to totally ignore the opportunity to cash-in, joining the push they’ve recently promoted via integrity fees and data licenses forced upon casino partners. It’s just too good to dismiss.

The reasonable compromise is planning state-of-the-art sports wagering facilities as close to stadiums and arenas as possible, allowing for excellent marketing opportunity without violating laws or distracting in-game activity. Kind of like keeping the party safely in the backyard, but never directly in the house.

This also wouldn’t be too unusual or groundbreaking for Chicago. The popular Meadowlands Race & Sportsbook is only a parking lot visit away from MetLife Stadium, holding both Jets & Giants games this season. A sportsbook location is planned in South Philadelphia, directly across from where the Phillies, Flyers, 76ers and Eagles all play. Ted Leonsis, the charismatic owner of the Washington Capitals and Washington Wizards, has long talked about opening a sportsbook directly inside the Capital One Arena in Washington, D.C.  He might also be looking at a closely zoned location nearby.

Without completely ruling it out, it’s difficult to envision sports wagering kiosks, windows and major advertising signage invading INSIDE U.S. stadiums within the near future. It is commonplace in Europe, where English Premier League games are dominated by wagering giants including William Hill, making it easy for punters to place bets inches from their stadium seats.

Are we ready to see giant DraftKings or Fanduel Bet Lounge signs attached to the ivy in left field at Wrigley? That’s likely an enticing $10 million-dollar question that will be highly debated before the first pitch next baseball season. The odds look a lot better for a huge wagering complex across the street. I’m betting while people will be traditionally chasing home run balls out on Waveland Avenue, they will be finding a lot of losing bet slips on the ground as well.