After the first three weeks of the college football season, Heisman odds are on the move.

Preseason favorite now the 3rd pick on the odds board

The Heisman trophy winner is one of the most heavily bet NCAA football futures going into each season and with the start of Week 4 of the college football season, oddsmakers have posted a new favorite. 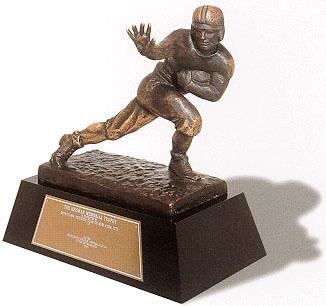 Prior to the kickoff of the 2021 college football season all eyes were on Oklahoma's Spencer Rattler as the Heisman favorite, and rightfully so. In the last five years Oklahoma has produced two Heisman Trophy winners and a runner up - winners Baker Mayfield in 2017 and Kyler Murray in 2018 and runner-up Jalen Hurts in 2019. Rattler was the preseason Heisman favorite at 5-1 at the top online sportsbooks. But, in wins over Tulane and Nebraska, he has failed to impress, despite the Sooners undefeated record. Rattler is now listed as the third favorite at industry giant BetOnline, where he sits at 10-1.

The surprise to oddsmaker and bettors is Ole Miss quarterback Matt Corral. The Rebels are 3-0 under head coach Lane Kifflin and huge part of that undefeated record is Corral. Through three games, he's completed 68.8% of his passes for 997 yards with nine touchdowns and no interceptions. The Rebels have averaged over 50 points per game and are currently ranked #13 in the nation

Corral entered the season with 25-1 Heisman odds. But now, he's listed at less than 2-1 to win the coveted trophy. Corral leapfrogged over Alabama signal caller Bryce Young to take over the top spot and has been taking heavy action from bettors. The two quarterbacks face off next week at Alabama and the Crimson Tide will no doubt be a heavy favorite. Depending on how each QB fares, we may see another shift in the Heisman Trophy odds and that what makes this particular NCAA future bet so tantalizing.

One man's garbage is another man's treasure

There is still a long way to go in the college football season and that provides opportunity for bettors. With BetOnline showing odds of 10-1 o Rattler, there is value on the pre-season favorite. #2 Oklahoma will be favored throughout the season and it is rare that the Heisman Trophy goes to a player not on a title-contending team. Ole Miss is undefeated, so Lane Kiffin's squad is still in the CFP National Championship picture, but the Rebels' current 50-1 odds suggest their chances are still very long. The showdown next week in Tuscaloosa may be a turning point for either Rattler or Corral and some bettors may want to wait until after that matchup before following the recent trend of betting on the current favorite.

And still others may be looking at some of the other top names in the Heisman race. North Carolina Tar Heels quarterback Sam Howell has been projected as a #1 pick in the 2022 NFL Draft, but lacks trusted weapons after four Tar Heel offensive standouts went to the NFL in 2021. Cincinnati Bearcats quarterback Desmond Ridder has guided the Bearcats to two consecutive double-digit win seasons, a 3-0 start and a ranking in the top 10. But again, neither of these two outstanding QBs may even get more than a passing look from the Heisman committee as it would take miracle for either of these teams to make the CFB playoff.

Part of winning these types of future bets is when the bet is placed and what kind of crystal ball bettors can look into. For now, the odds show seven players at better than 20-1 to win the Heisman. But the two CJs, CJ Stroud from Ohio State and CJ Verdell from Oregon play in two-QB systems and should not even be considered. JT Daniels rounds out the shorter odds players, but the Georgia quarterback has been banged up all season and despite a very high rating, Daniels has thrown just three touchdowns versus two interceptions in the team's three wins.

But, this is all what makes Heisman Trophy future betting such a big draw for bettors. Picking the right guy, at the right time can reap huge rewards. Check out the current Heisman Trophy odds posted at BetOnline and remember that these odds are fluid, changing every week, every game.

Right now at BetOnline.ag, bettors can get Boosted Odds on Matt Corral to win the Heisman Trophy. Listed above at +175, gamblers can grab +275 today only!