The lawsuit against Sheldon Adelson by former CEO Steve Jacobs will be heard in Nevada, though Adelson is appealing the ruling.

Last Friday district court judge Elizabeth Gonzalez ruled that the Steve Jacobs wrongful termination lawsuit deserved to be heard in Nevada courts, as Jacobs and his lawyers had requested. Sheldon Adelson's response was to challenge the ruling. The Sands lawyers had argued that The Sands China is a separate entity from The Las Vegas Sands but the judge agreed that The Las Vegas Sands had ultimate control of the Macau operation and that Sheldon Adelson was hands on with all dealings in Macau. Consequently the Las Vegas Sands were the real employers of Steve Jacobs and hence the lawsuit belonged in Nevada. Naturally Jacobs believes he'll get a more unbiased hearing in Nevada and that all his arguments will be considered, while Adelson probably feels that if the case is heard in Macau he'll just use his influence and connections to get the case quashed quickly since he understands that justice in China is not the same as justice in the United States.

What is most astonishing is that the case even got started in the first place. In almost every wrongful termination suit involving a major company when a CEO is let go, they are told to sign a non-disclosure agreement and in return are given a golden parachute. That way all secrets and any incriminating evidence is left behind and no one on the outside is the wiser. But in this case, according to court papers issued by Jacobs in 2010, he not only was terminated, but wasn't allowed to clean out his desk. Instead, Jacobs was led out of the office in Macau by two security guards in full public view and was dropped off at the Chinese border. No reason for termination was given at the time, but two weeks later a note from Adelson stated that he was terminated for cause and thus was not entitled to any severance. The general rule for severance for CEOs of short tenure is one year's worth of salary and incentives and it has been reported that Jacob's salary was $1.3 million per year. He was also apparently entitled to half that amount in performance bonuses and an undisclosed amount in stock options. Forbes reports that Adelson's net worth today is over $30 billion and it might have even be higher than that in 2010. So, the $2 million to $3 million The Sands would have had to pay Jacobs to keep his mouth shut was a drop in the bucket. Instead, what has become evidently clear in this case is that Adelson despises Jacobs so much that he was willing to drag The Sands and his own name through the mud and open up all dirty secrets rather than give a hefty severance package to someone he clearly sees as disloyal, underhanded and a stool pigeon.

As was pointed out in my last article on the case Adelson suggested that "This Jacobs never became important until he squealed like a pig to the government."

That is the type of language one would expect to hear from a Mafia don but Adelson clearly views Jacob's decision to go to the authorities with his concerns about dirty dealings including bribery and prostitution as a slap in the face to him and to his friends, especially after Adelson effectively told him to leave it alone.

Adelson also clearly believes that Jacobs was out to ruin the Sands, possibly for the purpose of joining a competing firm: 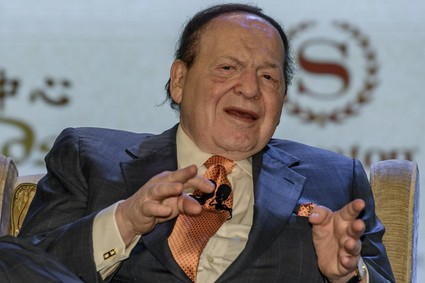 "He wanted to throw out 50%, 60% of the income by throwing out the junkets," Adelson said. "This was insanity. He purposely tried to kill the company."

And in their letter of defense in 2010 listing the reasons they deemed Jacobs was not entitled to severance, The Sands attorneys noted that Jacobs was secretly working on Caesars development sites, which exceeded his authority.

It's only logical that attorneys at The Sands would have recommended to Adelson to settle before Jacobs went public with any of the information he had on the operation, but Adelson wasn't about to put his name on any check for Jacobs, since in his view he was the one that was wronged. In Adelson's view everything was hunky dory in Macau. This, despite the fact the company wasn't profitable prior to Jacobs taking over as CEO, and all the concerns that Jacobs had relating to criminals running junkets, the bribing of Chinese officials and allowing prostitution rings to run in the hotels was just the normal cost of doing business, in that part of the world. And to quote Scooby-Doo episodes "I would have gotten away with it, if it wasn't for that meddling kid."

It should be noted that while Adelson clearly despises Jacobs, he isn't much of a fan of any of his overseas executives. According to reports by the Guardian during the trial, Adelson went on a rant about executives in Macau and Singapore begrudging the large bonuses, the education funds, the housing allowances and the company cars these executives get. In fact Adelson called the $30,000 a year school allowance and $50,000 college allowance "offensive."

Unfortunately for Adelson and his company, at this point he really can't just pay Jacobs and make the whole thing go away, even if he wanted to. All the information is out there and while Adelson and The Sands deny much of it, the media and public are looking for The Sands to prove that Jacobs' insinuations aren't true. And unfortunately for Adelson and his attorneys Jacobs apparently took very good notes and has supporting documents. More importantly the SEC and Department of Justice are looking closely at the case to determine if The Sands was in violation of the Foreign Corrupt Practices Act, the text of which can be viewed at the following link, http://www.justice.gov/criminal/fraud/fcpa/. That act states that U.S. companies can't pay bribes to get favors from foreign governments or they are guilty of a felony.

So what kind of corruption are the SEC and DoJ interested in? According to Jacobs' court papers there were 3 instances:

1. The Sands paid a $700,000 a year salary to Leonel Alves, who was listed as a Sands attorney, but was also a member of Macau's Executive Council and a regulator to exert favors from the Chinese government, including the ability to obtain apartments in Macau at a sweetheart price

2. Adelson told Jacobs to "use improper leverage against senior government officials of Macau." As an example, Adelson told Jacobs to "threaten to withhold Sands China business from prominent Chinese banks unless they agreed to use influence with newly elected senior government officials of Macau in order to obtain favorable treatment with regards to labour quotas and table limits"

3. Adelson issued an order to The Sands Macau that "secret investigations be performed regarding the business and financial affairs of various high-ranking members of the Macau government so that any negative information obtained could be used to exert 'leverage' in order to thwart government regulations/initiatives viewed as adverse to LVSC's interests."

"It can't be forgotten that Adelson is no friend of the Democrats in Congress."

Naturally any of these allegations, if proven true, could get The Sands in trouble and sources suggest that the DoJ and Nevada Gaming Board are seriously thinking about yanking The Sands license, if they indeed deem that the company knowingly and willingly violated the Foreign Corrupt Practices Act. Adelson probably feels he has nothing to worry about since The Sands is just too big and important to ruin, but the government notes that this is not the first corruption case The Sands has faced.

In 2013 the DoJ agreed to allow The Las Vegas Sands to pay $47.3 million to the U.S. Treasury in order to avoid money laundering charges. The Sands accepted large deposits via bank wires from Zhenli Ye Gon (who later became a Mexican citizen) who gambled with it and then withdrew much of it after winning. The Sands did not do due diligence on Ye Gon's deposits to check and see if the money was legit. As it turns out Ye Gon was involved in drug manufacutring. The full details of the case indicate that the company was so enamored by Ye Gon's large play that they let obvious hints that the money was suspicious be ignored. Not surprisingly many people are wondering why the company was let off so easily.

As well, it can't be forgotten that Adelson is no friend of the Democrats in Congress. Adelson spends hundreds of millions of dollars to defeat Democratic candidates in elections and he is constantly badmouthing the Democratic Party and its leaders, as well as their policies, calling them corrupt. For some in the government it would be sweet justice to see Adelson finally have to eat his words. And finally, Adelson has a lot of enemies. His current campaign to quash online gambling has made enemies with both MGM and Caesars not to mention other online gambling interests, so they would probably be only too thrilled to see their nemesis disappear.

To judge Gonzalez's credit it seems clear that she is not going to allow the stalling tactics to go on much longer. She notes that this case has gone on long enough and it's time to hear real evidence. Consequently Adelson's appeal should be heard and quashed very quickly.