Huge handle expected for the the 2021 NFL Draft

The NFL Draft has become a sports betting phenomenon during the last decade. The interest has led to more growth and betting options at leading online sportsbooks. The oddsmakers and contacts at BetOnline sent me a message that they are on pace for a record handle on the NFL Draft.

BetOnline is also offering live betting during the first round of the NFL Draft.

Confirmed. Live Betting for 1st RD of #NFLDraft will take place in the Live software this year.

The creativity of oddsmakers allows bettors to place more bets and target a greater number of player props. However, because of the many mock drafts and changing information on players, the odds adjust and often very quickly. By this time before the draft, the odds have adjusted significantly on many props.

For example, the exact position a player is drafted is a popular prop. If fact, it's the most popular prop bet for which player will be taken No. 3 overall. At some online sportsbooks, these were initially offered back in February, and the odds have changed dramatically heading into Round 1 of the NFL Draft on Thursday, April 29.

For example, with Clemson QB Trevor Lawrence the consensus No. 1 overall pick, oddsmakers were posting players odds on which player would be No. 3?

Jones was not in the conversation to be taken No. 3, or even top 5. By March 1, the odds had moved to:

By April 1 and teams now able to evaluate players at their Pro Day, and teams signing free agents, the odds looked like this: 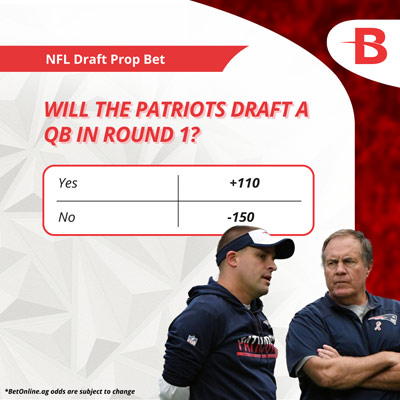 It was now clear that the top 3 picks would be quarterbacks, and the SEC wide receivers would not go top 3. The San Francisco 49ers had traded up to No. 3 with the opinion they were targeting a quarterback, and likely Fields. Now Wilson was presumed to be the No. 2 overall pick, so Fields was the favorite to be No. 3, but just slightly over Trey Lance and emerging Zac Jones.

The odds have really fluctuated over the past week, with Wilson going from +2500 to +3300 as seemingly the most certain No. 2 pick to the NY Jets. Fields, however, has gone from the favorite at -110 to an outsider at +600 as an NFL Insider tweeted on April 25 that his sources say the 49ers are deciding between Lance and Jones.  The same reporter said that Fields told NFL teams that he is managing the neurological disorder epilepsy, which can cause seizures. That 49ers are apparently taking cover, as Fields is no longer a top 3 candidate, per the odds at leading online sportsbooks. In fact, the BetOnline draft odds has locked the option to bet on Fields at No. 3, and made Jones the favorite at -225 to be taken No. 3, and Lance at +225. The odds on Lance have gone from +325 to +180 over the past week while Jones' odds have gone from +110 to -225.

So information is key when making bets on many NFL props, as is anticipation. Much like playing quarterback itself. But if you missed out on early bets, or odds of interest, there are plenty of other props and betting options.

One leading online sportsbook sent me a message that said by NFL Draft day on Thursday, there will be more money bet (handle) on  the draft than an average NFL game.

The top-10 most bet props at many top online sportsbooks are:

BetOnline has 114 unique draft props with 273 options available ahead of Thursday's First Round. But as noted above, the odds are volatile and change quickly.

BetOnline has launched two NFL contests available on both BetOnline.ag and SportsBetting.ag which are Free to Enter:

Players can turn their NFL Draft props predictions into free sportsbook funds when they bet the NFL Draft at BetOnline.ag or SportsBetting.ag.

Submit your answers to 10 questions and bet $25 on the NFL Draft to qualify for the prizes.

Players can enter the BetOnline $5,000 NFL Mini Mock Draft, predict the Top 10 picks of the 2021 NFL Draft and score free sportsbook funds to bet on BetOnline.ag or SportsBetting.ag.

How good are your Mock Drafting skills?

Bet $10+ on the #NFLDraft and get a free entry into our Mini Mock Draft Contest!

I'm on the sidelines for this year's NFL Draft, but look forward to covering and betting next year's draft when Las Vegas is the host city for what will certainly be a record wagering and major entertainment event.