A breakdown of the best contests available at online sportsbooks for the upcoming NFL season.

There is no bigger time of year at the top online sportsbooks than the start of the NFL season. This is when sportsbooks that take bets from U.S. players pull out all of the stops, offering big sign up bonuses, reload deposits for existing players, free bets and big money contests. And this year, without the cloud of COVID hanging over the season, more online sportsbooks are offering more NFL contests, some with enormous prizes!

Here are some of the top contests running for the 2021 NFL season.

Going back to  the mid 2000s, many of the NFL contests at online sportsbooks were free to enter. But with shrinking margins and regulations in many U.S. states, most of the contests online for the 2021 NFL season now require not just an account at the sportsbook offering the contest, but also a fee. Some books are offering two levels of contests, one with a small entry fee and one with a larger fee and a huge prize.

MyBookie is one that does multiple levels of contests with their annual Super Contest. this one is modeled after the old Hilton Superbook contest where players must pick 5 NFL games against the spread each week to earn points and climb the leaderboard. The big one at MyBookie is a $300,000 prize pool, with the winner grabbing $125K and places 1-300 cashing in. The $300K Super Contest costs $100 to enter. The next level is the $100,000 Super Contest, with just a $10 entry fee. This contest pays the winner a cool $25K and 750 players will win prizes, with places 501 to 750 doubling their entry fee. 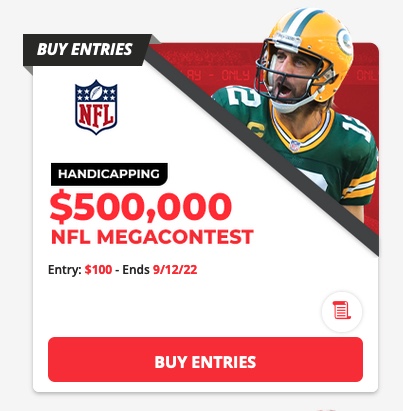 Industry giant BetOnline also runs a version of the old Hilton contest and offers a whopping $500,000 prize pool for their NFL MegaContest. This contest has a $100 entry fee, with $200K going to the player(s) that can collect the most points picking NFL winners against the spread over the course of the entire 2021-22 regular season. The top 300 players will win prizes with the lowest prize offered at $300. BetOnline also has something for the smaller player with their $10,000 Mini MegaContest. At just $2 to enter, this affordable contest is for every player and pays out a whopping $1,000 to the winner. Both of these contests give players the ability to purchase multiple entries and BetOnline is offering a special until September 4th for players who buy extra chances. Players can get five entries at a discounted rate of $275, plus an early bird entry into their $200K survivor contest!

Jazz Sports is giving away entries to their Weekly Pick 'Em contest, with the option to purchase more chances for just $5.

All existing players with at least one cash deposit in the last 30 days will receive one weekly entry courtesy of the house and new players will automatically get entered after an initial deposit of $250 or more, with additional entries fore subsequent deposits and bonus entries for using cryptocurrency. Players must pick all games on the board against the sprad (ATS) and the top three places each week will cash in. First place gets $500 in free bets, second gets $250 and third place gets $100. These prizes are paid each week.

BetUS has a handful of contests available! They offer a Pick 'Em contest that is similar to the OSGA Progressive Pick 'Em, where players can get weekly prizes and a season long prize. Each week, BetUS players pick the point spread winner for each NFL game with the top three players each week getting a weekly prize. First place is $1,000, 2nd place gets $250 and third grabs a $100 free play. In addition, the season long champion gets a cool $2,500! In all, BetUS has five contests for football season, including a college football pick em.

Multiple online sportsbooks are offering Survivor or Last Man Standing contests. On these types of contest, players pick one team to win each week, straight-up (SU), meaning no point spread is involved. If the team selected wins, the player remains alive and continues on to the following week. If the team picked loses or ties, the player is eliminated. Once a team is selected, that team is not available for selection for the remainder of the contest. It sounds easy - just pick one winner each week. But with the ultra competitive NFL and the caveat of not picking the same team twice, it is quite tough to be the sole Survivor.

The biggest prize again comes from BetOnline - a whopping $200,000. The NFL Survivor Contest requires a small entry free of $30, with players able to purchase up to 25 entries for as little as $10! MyBookie also tips the scales with a huge prize pool of $100,000. There is a small $10 entry fee and players can buy up to 10 entries to vie for the sole survivor.

YouWager has offered a survivor contest for many years. The offer their Survivor Pool Contest for a $100 entry fee and the final winner will win 80% of the pot, up to $50,000! Jazz Sports also has a Last Man Standing competition, where the top three players can get paid. The sole survivor will win $2500, the runner-up $1000 and $500 for the third-place finisher. As with their Pick 'Em, players can earn entries to keep it a free to enter contest. Existing players with at least one cash deposit in their account will receive one entry courtesy of the house, and additional entries can be earned by account activity until the moment the tournament officially starts. New Jazz members will be given a free entry with a deposit of $250 or more and cryptocurrency will double the amount of entries.

Multiple ways to cash in

America's Bookie has three different ways for players to  cash in this football season. They offer players a Last Man Standing contest with a grand prize of $2500 cash and a weekly squares contest, where any AB player who makes a deposit Monday thru Friday, can get a entry into their weekly Monday Night Football squares pool with a chance to win, half or all of the biggest deposit made that week. The most intriguing offering from America's Bookie is their Bet33 Club. Players who make a deposit of $300 or more can select one team, and if that team scores exactly 33 points (win or lose), it's a winner for the client. More money deposited means more teams to choose and win!

And finally, BetUS is offering five contests for football season. The BetUS Pick 'Em contest gives weekly prizes to the top three players and a prize for the overall season winner. The BetUS Ironman contest rewards players who bet on alot of games. Any wager type, with a $5 minimum, could win thousands in prizes. The

player who cashes the most bets each month will receive a $500 Freeplay! For the entire season, the player who wins the most bets will get a $2,500 Free Play, 2nd place gets a $1,000 and the third place winner gets $500. The $25,000 Gridiron Guru also rewards players just for betting. $25K is up for grab to the player(s)who win the most consecutive bets. Contestants who place a minimum $10 real-money sportsbook wager are eligible. Win 15 wagers in a row and get a $1,000 Free Play. Win 20 bets in a row and get a $5,000 Free Play. The first player of the season to win 25 bets in a row, is the BetUS Gridiron Guru, and receives $10,000 in free play! The BetUS 12th Man rewards members who know their team! Simply choose a team, then bet on that team’s game (it doesn’t matter what side you back, just that you bet on the game – either the Money Line, Point Spread or Total) each week and get a big wager on Super Sunday. Players who bet on their favorite team for 14 weeks of the season get a $50 free bet on the SuperBowl, bet on your team every week and get a $500 free play for the Big Game.

And let's not forget college football! BetUS is the only top online sportsbook to offer a college football pick 'em contest. It called School's Out and it's a College Football Bowl contest. Players pick the winners of every College Football Bowl game and guess the score for the Championship game. The top three players with the most winners will get a freeplay! It's that simple!

This is the time of year to not only get great offers from the top rated sportsbooks online, but to cash in on great contests. Whether looking for a freebie or paying to grab a piece of half a million dollars, there is a way for every player to cash in this football season.