A new, decentralized online poker concept could pave the way for the future of online gambling by eliminating many of the problems today's gamblers face.

Ethereum based online poker game could be the future

Last year a group connected to the Ethereum blockchain (ETH) announced a project that they believed would revolutionize online poker. The product, called Virtue Poker, is set to be the first decentralized poker platform, where nothing is stored on servers and all poker play is generated by peer to peer smart contracts, while payments are made instantaneously to ETH wallets. Virtue Poker was clearly created to offer a poker product for ETH owners and would compete with the myriad of Bitcoin gambling games that are available on the web today, but added an extra incentive because it is decentralized. Most staff at Virtue Poker consists of blockchain developers and the list of advisors to the project is impressive.

Joseph Lubin, the co-founder of Ethereum and Consen-Sys (a software designer for the Ethereum blockchain) is a Senior Advisor on the project as are other management and legal experts at Consen-Sys, who have a long history of both poker and blockchain experience. Virtue Poker also announced two poker professionals, Dan Colman and Brian Rast, who will help promote and advise the new platform. The idea was presented at a blockchain conference by Ryan Gittleson, who oversees marketing at Virtue Poker, and it was met with a great deal of excitement and hope that this could be the future. I chose, however, not to write about Virtue Poker until more information was released, but that recently occurred via a draft whitepaper published on Virtue Poker's website. 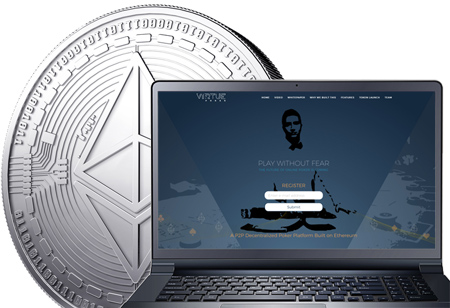 The main selling points of decentralized poker according to Gittleson are greater security than current online poker products and the instantaneous nature of payouts. The games are designed as a series of smart contracts between players and the cards are dealt via encrypted shuffle keys which ensures that only the player can see their cards. And only when the player removes the shuffle key (i.e. unencrypts it) can others see the cards. Naturally there would be no shuffle keys for the community cards in hold 'em games. Computer logic, published on the blockchain is what controls the parameters of the game so anything fishy would be identified immediately by ETH users. Consequently, the need for third party verification to the fairness of a game by a company like eCogra is unnecessary.

The whitepaper begins by pointing out the problems with current online poker products. It highlights the Absolute Poker and Ultimate Bet scandals where software creators never deleted the superuser accounts and allowed some in management to cheat and view the hole cards of other individuals at the table. The whitepaper suggests that with Virtue Poker there are no servers and consequently there is no chance of management fixing results or seeing other's cards. The whitepaper was very complex in this area so I asked Gittleson to explain why superuser accounts aren't possible.

"The entire section in the white paper that discusses Mental Poker illustrates how we do this and how our games are fair. Players have an RNG in their machine that is used, and all players are involved in card shuffling using the protocol. The issue with Absolute Poker and Ultimate Bet was that their software was designed such that there were administrative accounts that could see all private cards for all players. This was a flaw in their software that was exploited by a company insider. This is impossible on Virtue Poker because there is no all-seeing server, and all users' private cards are private to players using encryption (see the section on Mental Poker). Virtue Poker however will utilize our Justice System to store hand histories for player accounts on our platform so that we can provide anti-cheating provisions such as collusion detection, bot detection, multi-account prevention, and account sharing."

The use of this justice system has been met with some skepticism in the poker community, however, as was evidenced by a couple of posters on the twoplustwo poker forum who suggested it was just laziness to avoid hiring proper staff to look for cheating. The following post was on twoplustwo:

"I skimmed the white paper and read the part about game security which is obviously one of the biggest issues. instead of hiring a staff to monitor game security, they're going to farm it out to random people online and reward them with Virtual Dollars". The poster continued. "What they really need these people for (justices) is for additional nodes on their network (like miners for bitcoin). Pretending they will help catch colluders is a clever way to disguise it."

I showed that post to Gittleson who outright refuted it.

"This is untrue. We've hired a game security expert already who currently works with our team, see Peter Marr. He's previously worked in game security for major operators such as Full Tilt. Our hand histories will be stored by Virtue Poker. We will use our team of game security experts to review that data to detect patterns of cheating. The Justices are a means to log game-level data for all players and all hands played on the platform. See the how the Justice System will work here.

We will be storing the hand-histories and having our team of game security experts (including Peter Marr) review this data to detect patterns of cheating (including collusion). At a high level, this is done by using uPort to verify each individual player's identity, then using the Justices to store all of the hand-histories for all players on the platform."

"A major benefit of decentralized poker is that payments are credited to wallets immediately."

I looked at the uPort website, which is used for identity management and to ensure that those under age or in locations that can't play in the games are blocked. The technical aspects of uPort are far too complex for this article, but can be viewed by those interested at http://www.uport.me.

Another major benefit of decentralized poker is that payments are credited to wallets immediately and avoids the need to segregate post up funds. The whitepaper points to the misuse of player funds at Full Tilt (which the FBI called a Ponzi scheme) as well as Lock poker where management never paid players and ran off with over $15 million in player funds. There are other times with online sports betting where management misappropriated player funds including Ace's Gold, BetCamelot, NewAge Bets, WSEX and many others. Plus, there have been multiple times such as with Bodog and BetonSports where the government seized funds in transit. Those weren't mentioned in the whitepaper because the paper was focusing on poker, but will be familiar to online players. With Virtue Poker, funds aren't held so there isn't that concern. As players play the games the blockchain freezes the amount being played but then releases the funds immediately into the winning players ETH wallet as soon as the game is over. So, there is no money being held in escrow, there is no concern about whether "post up funds are being segregated" and there is no concern about management stealing off the top because everyone controls their own wallet and management never touches the Ethereum being wagered.

One obvious question to blockchain novices like myself is how is this any different than bitcoin gambling sites?

Gittleson explained: "BTC poker sites are centralized, they have servers that host their RNG that is used for card shuffling, and players have to deposit BTC onto a centralized site that owns their money, and players still have to request to withdrawal their money.

Virtue Poker is fully decentralized, and uses a P2P game engine using a Mental Poker protocol that involves all players in card shuffling. We also don't store your money. Players fund digital wallets that they control, and join games by sending ETH to a smart contract on Ethereum which escrows games buy-ins and autonomously distributes payouts based on game outcomes. The money is never stored or owned by us, funds are stored on the blockchain, so we remove the risk/trust players must take when depositing onto any other poker site."

One other area that is highlighted in the whitepaper is the use of tokens and virtual player points that can be used to pay justices, pay staff and pay for the development of the product. Again, the following was posted on the twoplustwo forum:

"The idea of a poker room using a blockchain and smart contracts is a great idea. I don't want to crap on that idea. but the fact that they're using a token sale to fund their business is where it becomes a quasi-scam. they're going to create VD, virtue dollars, but they won't sell all of them. for example, let's say they create 1 million virtue dollars. they might sell 300k VD in their token sale and then keep 700k in a piggy bank. once a bunch of people pump real currency into VD, the 700k VD they created out of thin air now gains actual value.

A token sale is a form of fundraising but they sell you a lie. They pretend they are selling you an item that has value, but it's an item that might have value, 10 years down the line, if the best case scenario plays itself out. In the mean time, they will use your real currency to fund their business, and you may or may not hear from them any time in the next 3 years. They do it this way because nobody will give them money via the traditional methods because they don't have anything close to a functioning product, proven idea, or apparently, a full staff".

Gittleson, however defended the use of tokens and indicated they do have value:

"There isn't such thing as Virtue Dollars. Virtue Player Points can be used as chips on the platform. Players can wager using VPP. Over $1.8 billion dollars have been raised this year via token launches on Ethereum. Ethereum itself was a token launch. It is a means to fund decentralized applications built on Ethereum.

Our token, Virtue Player Points, will be sold during our token launch. The unsold tokens from the sale will be used to grow the platform, and acquire players via guaranteed tournaments and freerolls."

Gittleson was also unimpressed with the tone of the poster on twoplustwo forum:

"This comment does not seem to come from someone familiar with blockchain technology or the cryptocurrency space. $1.8 billion dollars (more money than has been raised via VC funding), has been raised this year using token launches. The SEC even has condoned the activity, and governments around the world have approved token launches. Major venture capital firms such as Union Square Ventures have participated and supported token launches on Ethereum. It is a mechanism of fundraising that was created by Ethereum, and has helped fund 100s of projects with new ideas all looking to build decentralized applications and new technologies using blockchain technology.

We have had million dollars worth of funding offered to us over the last few months. We have been funded by a company called Consen-Sys for over two years. Consen-Sys was founded by Joe Lubin, a co-founder of Ethereum, and Consen-Sys has over 350 people. Virtue Poker is one of many projects that has been funded by Consen-Sys over the past 2 years."

Gittleson said that he expects the project to launch in 2018 and has been tested for over 2 years by developers.

Virtue Poker is indeed an exciting prospect and if it turns out to be a popular and successful product one can foresee it being applied to sports betting via peer to peer wagering, as occurs today on the Betfair exchange, Betdaq and Matchbook.