The Sweet 16 tips off Thursday, and we've seen some line adjustments at the leading online sportsbooks. Top seed Gonzaga is up to a -9.5 point favorite after opening -8 vs Arkansas at BetOnline. That's a #1 vs #4 match-up to tip off Thursday night's NCAA Tournament action, and also features the highest total of the Sweet 16 games at 155 (down 1 point). But the game that has moved the most and switched favorites is the double-digit seed match-up between #10 Miami and #11 Iowa State. The Friday night contest has seen a shift from Iowa State -1 to Miami -2.5 at BookMaker. 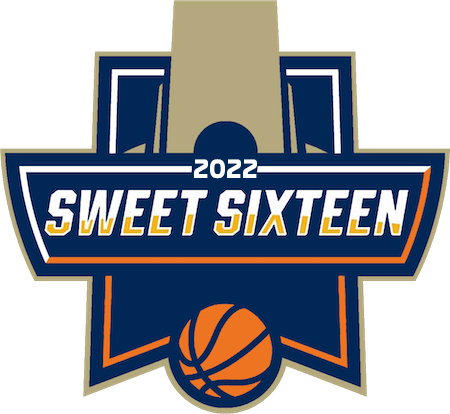 But the biggest underdog and highest seed still standing and dancing is #15 St. Peter's. The Jersey City boys are playing good basketball led by their under-rated defense and clearly fit the profile of Cinderella in the Sweet 16. It was 9 years ago today that Florida Gulf Coast became the first #15 seed to make the Sweet 16, and the St. Peter's Peacocks and their betting backers are looking for another payoff against Purdue.

The East and West Regions have the most No. 3, 4 and 5 seeds remaining with #3 Purdue and #4 UCLA in the East, and #3 Texas Tech and #4 Arkansas in the West. The South and Midwest still have #5 Houston and #4 Providence alive and shooting for an Elite Eight appearance.

No. 1 seeds have won the last four NCAA Tournaments, and three #1 seeds remain with defending national champion Baylor eliminated by #9 North Carolina in the East Region. So was #2 Kentucky in the East.

But both #1 Gonzaga and #2 Duke are still dancing in the West Region as top seeds, and a win by both teams Thursday night sets up a rematch from Nov. when the two top teams played one of the best and most entertaining games of the season in Las Vegas. I saw it live in person and bet on Duke SU and on the ML as a +9 point 'Dog and the Blue Devils won 84-81.

In the South and Midwest Regions, the #1 seeds remain with Arizona and Kansas along with #2 Villanova. I also saw Arizona beat UCLA in the Pac 12 Tournament championship game in Las Vegas this month. I bet on Arizona in the 2nd half -2.5 and ML, and the Wildcats shook off a 5-point halftime deficit to beat the Bruins 84-76.

Despite some betting support on Houston playing in their home state against Arizona (-1.5) and some solid stat profiles for the Cougars, I still prefer Arizona to advance making them a small bet in their Sweet 16 match-up with live betting options in play. Houston has two Quad 1 wins this season and last rounds results have influenced and impacted the power rankings in the reshuffled Sweet 16. In addition, there are few college coaches that want to see the 'snake oil' shtick of Kelvin Sampson advance to a Final Four, and neither do we. Houston made the Final Four last year but drew double-digit seeds in the Sweet 16 and Elite Eight before getting blown out by Baylor in the Final Four. Let's hope the Wildcats claw the Cougars in a cat fight.
In last year's NCAA Tournament and Sweet 16, three #1 seeds advanced and went 3-0 SU/ATS. That included Gonzaga and Michigan as #1 seeds, who are still alive this year, and eventual national champion Baylor, who failed to make this year's Sweet 16 as a top seed.

There is another statistical profile that points to #1 seeds being more vulnerable to losing against a #4 or #5 seed in the Sweet 16. It's a solid situation that uses scoring margin as another criteria in pointing to Sweet 16 winners. Top #1 seeded teams with a scoring margin of less than 14 points per game are more likely to get knocked off by a #4 or #5 seed, making Kansas more vulnerable. I also made a chip-in bet on Providence as underdog against Kansas.

Get in the Sweet 16 contest and head to BetOnline.ag or Sportsbetting.ag to get the Boost and the entries to the giant 100K Sweet 16 Bracket Contest before it is too late!

FairwayJay is a proven sports handicapper including past documented top of the leaderboard college basketball results. FairwayJay chips in additional sports betting coverage and reporting on industry news and events. Read more great insights from FairwayJay and follow him on Twitter: @FairwayJay