Many Betting Lessons Courtesy of the Golden State Warriors

A look at a few wagering components that worked for betting the Golden State Warriors and could be used for any team sport to cash in.

The Golden State Warriors may be THE laboratory example to study team wagering, not just for basketball, but perhaps covering all four team sports, including football, baseball and hockey as well.

Though shooting a basketball has nothing to do with shooting a puck, hitting a home run or scoring a touchdown, the basics of analyzing the betting formula of successfully backing a team are similar when you break it down to the Warrior's success in the NBA playoffs. Taking license here and "prematurely" awarding them the NBA Championship over the next week, here's a few wagering components that worked for betting Golden State and we could look for, in any team, to help us win.

Gamblers rarely have it. Especially upon losing streaks and the main reason why they're prone to press. Horse players are known to be the worst, needing to bet every two minutes in our simulcasting age for results that often take place in about a minute or so.

Therefore, why would anyone wait two long months to bet Golden State as a virtual lock at anywhere between -150 to -175 to win the NBA Championship at most of the major offshore sportsbooks? Not to sound like an "I told you so" but I warned everyone of an investment in the bank opportunity if they were just willing to put aside their money in late April. A $500 bet would likely net you around $335 by perhaps Sunday. A very reasonable $1,000 strategy investment has you collecting a pretty $675 by next week. You get the idea.

If it was a mutual fund, a bank CD or a boring blue-chip stock, we might conventionally wait months for it to reach maturity or peak performance. But the age-old debate of "gambling vs. investing" put this argument back into play. Again, the victory parade for the Warriors hasn't begun, but I suppose waiting two months through four forever rounds of NBA playoffs seemed like an eternity for most of us back in April. 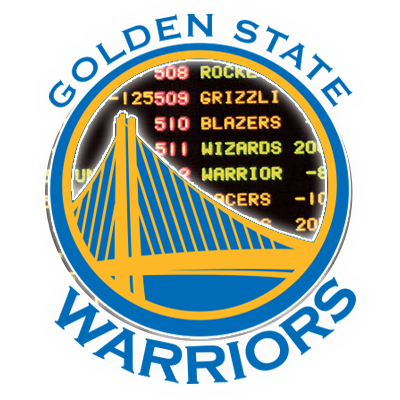 It was only a week or so ago Golden State was down 3-1 to the Oklahoma City Thunder and being counted out. Stephen Curry and Klay Thompson's record 73-win season seemed a waste and more people were jumping ship than the on the Titanic. For fun, read all the negative articles laying around the house about the Warriors and their false comparisons to great Bulls, Celtics and Lakers teams of recent past. Hello. Opportunity was banging on the door so loud virtually nobody could hear it.

That's why you could have gotten at least +230 to +275 at offshore sportsbook leaders Bovada, Diamond Sports, BetOnline and most others to win the remaining three games. Bovada had the Warriors listed at +350 to win the NBA Championship and the Cleveland Cavaliers as favorites. Should Golden State win it all and you took advantage of this juicy opportunity, you deserve every penny of your winnings for your loyalty. And sense of good timing.

What Have You Done for Me Lately

Flash forward to Wednesday, June 8th in Game 3, and likely Game 4 as well, in Cleveland this Sunday and another valuable lesson awaits. What would you have predicted the line to be for Game(s) 3 and 4 in Cleveland before the series began?

I would have estimated the Cavs being a 3 to 4.5 point favorite at home, where they have been a monster all season long. Despite the Warriors record season, the Cavaliers have been an underdog at home only once since January. That was to the mighty San Antonio Spurs as at +1. They crushed the Spurs in that January 30th game 117-103. They've been favorites in every game at home since.

No doubt the Cavs dismal 33-point loss in Game 2 has dominated the line and bettors thinking. Who would have believed the Warriors would be a -1 favorite, where they currently sit at most top online sportsbooks for Game 3? In only a week to ten days the Warriors have gone from fraud to again being "one of the greatest ten teams of all time". What have you done for me lately?

Don't remember the Titans. Remember the Warriors as we get ready in a few months to enter the long football wagering season.

As the Carolina Panthers were a great Over bet in the 2015 NFLbetting futures market and almost an incredible 40-1 winner to win the Super Bowl, it often pays to have patience. Timing can also be key. Like if you waited to bet last year for the right moment when Tom Brady & the Patriots won their Deflategate case. And keep in mind our "what have you done for me lately" wagering world. Bettors have a real short memory and their line changes every 30 seconds or so.