Hartley examines the locations for casinos to be built in Japan and the bidding war that is underway.

In 2016 the Japanese government passed a law to legalize integrated resort casinos (IR). The idea, which seemed almost impossible until that time, due to opposition to gambling except pachinko by many politicians and citizens, immediately gained the attention of major casino operators in the U.S., Asia, and Europe. Four prefectures announced an intention to submit a bid for a casino including Osaka, Yokohama, Nagasaki and Wakayama and the Japanese central government said that three of the bids would be given a casino.

Osaka was clearly the big draw since it is a major economic center, tourist area and has almost tropical type weather year-round. MGM, Genting, Galaxy, Las Vegas Sands and Wynn were all originally in on the bid, but when MGM announced it was willing to spend as much as $12 billion, all the other bidders dropped out. At the time it was estimated that gambling in Japan would be a $40 billion a year business and MGM viewed the $12 billion as a bargain. It appeared that the deal was about to be finalized in 2020, but then the COVID-19 hit. As a result of pandemic several issues occurred that lowered the possible value of the bid. 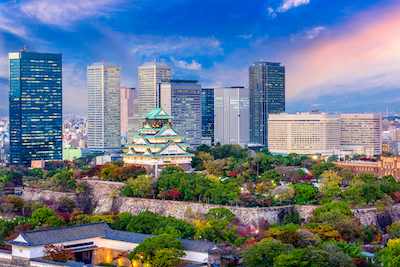 First, it was clear that the casino would not be built in time for the 2025 World's Fair in Osaka, which the prefecture and MGM were hoping could be the highlight of the fair and promote the city as a prime tourist destination. Second, the Chinese government began to crackdown on gambling by Chinese residents and said they would make it illegal for Chinese residents to gamble in all Asian cities except Macau, meaning the Japanese casinos were about to lose a prime market. And third, with most land-based businesses shut down due to Covid, many Japanese residents started looking for something to do at home and discovered the ease and pleasure of gambling on the Internet. Moreover, the country hoped that the summer Olympics would help spur interest for Japanese tourism, but the games were held a year later than expected without fans in attendance and consequently it really did little to help generate much interest in Japan as a place to travel. Consequently, analysts lowered the $40 billion per year estimate to $25 billion and many experts said even that was a major stretch. It, therefore, seemed that MGM was going to drastically lower its bid and Osaka was going to hold out until the prefecture could get what it wanted.

But this week MGM and Orix Corporation, a large Japanese financial services company, reaffirmed it would pony up $10 billion as a partnership for an Osaka casino to be built on a man-made island in Osaka Bay. The resort will have a conference center holding up to 6,000 people, a 20,000-person exhibition space, and at least one hotel casino with 2,500 rooms. The partnership also said that their plan would create close to 15,000 well-paying jobs. MGM admitted it was an ambitious target, but they said that they hoped to still have something to show for the World Fair in 2025. It's not sure how much money each company is going to put up, but it seems that MGM may be the minority stake in the bid.

Yokohama, which is a city close to Tokyo, was the second most valued city for an IR, but plans for a casino there were dampened when Yukio Fujiki, a highly regarded businessman known as the "Don of Hama", threatened to kill himself last year if a casino was built in that city. And the bid was officially dead when the city voted in Takeharu Yamanaka in August as its new mayor, succeeding Fumiko Hayashi. Hayashi who was the mayor since 2009 was in favor of a casino, but Takeharu said he views casinos as a "poison apple" and announced that Yokohama would not submit a bid and disbanded the IR promotion office. Consequently, any hopes for a casino in Yokohama are gone.

Nagasaki, located in the western island of Kyushu and probably most famous for being the second city that the United States dropped the atomic bomb on in 1945 to end World War II, announced last month that it had selected Casinos Austria to build an IR there. The Austrian company, which has 25 properties in 9 countries, plans to build a 100,000 square foot gaming space with 2,200 slot machines and 220 table games. The resort casino would also include a shopping center, a large meeting space, an entertainment space and up to eight hotels, each with a thousand or more rooms. It is also partnering with the Hilton Hotel chain. The somewhat confusing part of this bid is that the city plans to charge Japanese residents to enter the casino and limits how often they could use it.

While foreigners would be able to enter the casino for free, Japanese residents would be required to pay 6,000 Yen (about $50) to enter the casino and would be limited to three visits per week and a maximum of 10 visits in 28 days. The hope is that it would dissuade Japanese gamblers from using the casino for fear that the casino could create problem gambling, and the city instead hopes to make most of its money by luring visitors from other countries. To date, only Monte Carlo charges individuals to play in a casino. While the plan seems like a done deal, it appears that Oshidori International Development, which also bid for the casino but lost, may be preparing to challenge the ruling in court, claiming that the process which awarded the bid to Casinos Austria was unfair.

Wakayama, a prefecture about 50 miles south of Osaka, is the last area that wants an IR. It appeared for the longest time that the bid was going to be given to Clairvest Neem Ventures, the subsidiary of a Canadian private equity firm, as they were the only ones who expressed interest in building an IR there. But in the last 48 hours Caesars Entertainment announced that it was planning to join Clairvest in the bid. No doubt that announcement was made because of MGM’s winning bid for Osaka as well as the announcement by Yokohama that it was pulling out of the bidding process. Wakayama was seen as the longshot to win the rights to a casino given its proximity to Osaka, but with Yokohama no longer in the picture, Wakayama now seems assured of a casino since there are only three prefectures left.

According to the terms, Clairvest and Caesars would invest $4.3 billion to build the integrated resort casino with Caesars likely taking a minority stake, since their focus is still on the United States. Currently Caesars is one of few U.S. major casino operators that doesn’t have a presence in Asia. It’s uncertain what the IR would entail, but under the rules of the Japanese government, all IRs must include at least one 4-star hotel, a shopping center, and a convention space. At 4.5 billion dollars there is no doubt that the plans in Wakayama will include much more.

What's Next for Japanese Casinos?

So, the question is what’s next? Under the rules set out by the central government, all prefectures will submit their bids starting today (October 1) and on April 28th, 2022, the central government will announce the winners. Given the current situation, there is no reason to suspect that all three prefectures won’t be awarded the rights to build their casino (although no doubt Osaka will express concern that Wakayama is too close in proximity to their prefecture), and it seems the only issues to be ironed out is how much money will be given to the central government and when exactly the IRs will be built.

Not surprisingly, there are some Japanese anti-gambling groups opposed to the casinos who plan to demonstrate to try and stop the casinos from going ahead.  But in the end, the government will do what’s best for the country, and with Japan struggling at the moment from the effects of COVID-19, the IRs will be viewed as a way to regenerate interest in tourism, provide money for public coffers and give citizens something to look forward to. And given Japan’s cultural history there is no doubt the IRs will be spectacular.