For American football there is only one season

In the wake of the collapse of the AAF, Hartley looks at why football can't generate interest beyond the NFL and NCAA to support another league and offers insights into what may work, including partnerships with sports betting companies in the U.S.

Last week the Alliance of American Football (AAF) folded eight weeks into their inaugural season when owner and commissioner Tom Dundon announced that he was ceasing operations. Despite a considerable amount of promotion for the league by various entities attached to the NFL, attendance and viewership just never reached levels high enough to cover the salaries and cost of operations and reports had it the league had lost well over $100 million with no sign of improvement.

The failure of the AAF should not be surprising. Football fans in the United States have never supported professional football after the NFL season is over. The first failed league (excluding the various leagues that eventually got enveloped into the NFL) was the United States Football League (USFL). The thinking behind the USFL, which played for three seasons in the early 1980s was that there was a hankering for American football year-round, so by offering a product after the NFL and NCAA seasons were over, they would capture a market of Americans who were still looking for a football fix. Some analysts felt it could be successful since Major League Baseball is the only viable professional sports league operating during those months, but baseball has a different fan base than football. The same holds true for popular individual sports in the spring and summer such as golf, tennis and motor sports.

The USFL, operated 12 teams in 1983, its first year of operations, and 18 teams in the following years. The league drafted a lot of good players who couldn’t make it to the NFL and it was well acknowledged that the USFL provided good quality football. Even Donald Trump got involved as an owner at one point!

Unfortunately for the league it just never got much traction with the public. Attendance at almost every game was far lower than necessary to justify expenses and TV viewership was fairly low. Despite tons of promotion, football fans just weren’t interested. League owners realized they were fighting an uphill battle and would never attract enough interest in the spring and summer so in 1984 the league announced it would operate in the fall, in direct competition with the NFL, starting in 1986. Some owners with interests in NFL teams immediately pulled out over the decision, but the majority of owners agreed to the decision. Upon hearing this, the NFL worked with the major networks to shut out the USFL from television contracts which led to the USFL filing an antitrust lawsuit against the NFL. The USFL won the case, but the courts ruled that the USFL had itself to blame by completely changing its structure and strategy and consequently were only awarded $1 in their lawsuit and the TV stations indicated they would not air USFL games. This led to the league folding in 1986 before fall play ever commenced.

Another league that never made it was the XFL which operated in 2001. The league was a joint venture between the WWE and NBC. Like the USFL, the thinking of the owners was that they could capture the football fans who yearned for the product in the off-season. The league adopted a strict salary structure and limited rules to promote more violence and quicker play, believing by doing so they would attract both football and wrestling fans. The most recognizable player in the league was Rod Smart who was popular not because of his skill, but rather because of the unusual name on the back of the jersey, "He Hate Me," which he said other players would be saying when he dominated a game. Following the popularity of Smart, other players wrote silly sayings on the backs of jerseys, although none of those really caught on. As a result of the wrestling connection, which used sex along with violence to sell its product, the league also highlighted very scantily clad cheerleaders on the TV telecasts, which eventually led to the Lingerie Football League. Not surprisingly the play in the league was terrible among the second-rate football players, and the novelty of the product quickly wore off leading to the league experiencing low attendance and viewership and a loss of over $30 million in the first year.

Both the WWE and NBC acknowledged it was a failure and folded the league after the season ended. The XFL apparently encouraged wagering on its games and one offshore sportsbook owner I spoke to who took action on the games at the time said they got surprisingly good interest in the first two weeks of the season, but in the weeks after, the bets were almost non-existent. He also said because of the weird nature of the league it was hard to create proper lines, so they had to drastically lower betting limits.

The Arena Football League (AFL) was another league which really never became a household name. The AFL has operated every year from 1987 until now, so one would suggest that it is a success for being around over 30 years. But while it does have a very small following, it has never generated the attendance or viewership necessary to justify its continued existence. In its early years, until 2000 the games were broadcast tape delayed by ESPN in the wee hours when no one watched (and before the days of PVRs). But in the early 2000s the success of Kurt Warner for the Iowa Barnstormers and his later success in the NFL for the St. Louis Rams made some believe the Arena Football League could become a good development league for the NFL. This led to some decent TV contracts.

Unfortunately, the creation of the development league never materialized. Kurt Warner was an anomaly and almost every player that went from the Arena Football League to the NFL failed miserably. Consequently, national TV contracts quickly dried up and the league went through various forms of reorganization and contraction and for the 2019 season the league only has 6 teams located in Albany, Atlantic City, Baltimore, Columbus, Philadelphia and Washington DC.

The biggest problem with football, compared with baseball and hockey is that there are only so many good players to go around, especially at quarterback. The stars go to the NFL and the remainder generally go on to the CFL or NFL Europe. This has been an issue for decades. In fact, some of the most successful NFL quarterbacks came from other leagues and especially the Canadian Football League (CFL). Joe Theisman, Warren Moon and Doug Flutie were just three famous names that first made their name in the CFL before becoming stars in the NFL. As a result, it’s difficult for football to truly create and support a league to develop players since any good players almost always move right from the NCAA to the NFL. The NFL did try this once when they supported a move by the CFL into four U.S. markets (Baltimore, Las Vegas, Sacramento and Shreveport) in the mid 1990s hoping that the league could develop players to move to the U.S., but other than a couple of place kickers no players could make the jump. And only Baltimore, which seems to support any football league, had an attendance high enough to justify its existence. Consequently, after only two seasons the CFL went back to a Canadian only league. As for other leagues, basketball did try a couple of summer leagues that failed and baseball by its nature is played only in warm weather.

First, there must be a realistic salary structure. There is no possible way any league could generate enough attendance and viewership to justify million-dollar salaries.

Second, the league needs to emulate NFL football with what it can get. When it comes to sports, diversity is not a strength. People want to watch something they can identify. So, eliminating the punt and having a mad scramble to get the ball to start the game as the XFL did is a novelty that wears off quickly.

Third, the league must go into markets they know will work. There is no point in launching a team in a place like Albany or Shreveport where there isn’t enough of a local or national following to get interest. It’s best for the leagues to stick to markets like Baltimore, New York and Philadelphia where they know they will get decent support.

Fourth, and most importantly, they must attract betting. This is probably the only reason any off-season league has a realistic shot of working. 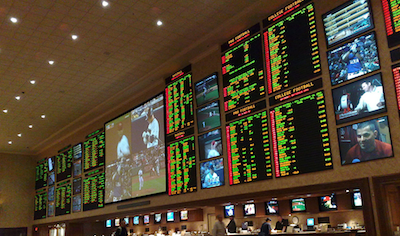 Football is still the one league sport that is built around wagering and bettors are glued to TV sets because the nature of the game makes it perfect for wagering. Millions of Americans wait for the point spreads and totals to be listed to get their bets down with offshore and illegal bookies but with sports betting now legal in the U.S., millions more will do the same to wager at their local legal bookmaker. So, for a league to succeed a new league needs to not only encourage wagering on its sports, but also set up partnerships with sportsbooks that are now legal in the U.S.

One must wonder if the Alliance of American Football could have made it if it teamed up with sportsbooks and created, say, the William Hill Alliance of American Football? Naturally there would have to be other incentives too such as promotions and sign up bonuses for ticket purchases and they would probably need a ton of advertising. And telecasts could be built around betting. For example, viewers could enter a free handicapping contest or even a squares type contest where they win money on televised games. It’s been proven repeatedly that having a vested interest in a game is a sure way of attracting interest in any sport. As well, it would be helpful if the new league teamed up with FanDuel, DraftKings and Yahoo to get their sport a place in the fantasy sports world. Doing so would possibly create more recognizablility among bettors and Fan Duel or DraftKings could benefit as well by sponsoring a team.

So, there is no question that leagues operating in the offseason have been a colossal failure and the AAF is the latest proof of that, but can that be changed?

A year ago, my answer would have been an unequivocal no, but SCOTUS’ decision to repeal PASPA and legalize betting throughout the United States has changed all that. More and more states are now making plans for sports betting and bettors in cities with a sports team are more likely to support a new league if they can bet on it.  Eight states (New Jersey, Nevada, Delaware, Pennsylvania, Mississippi, West Virginia, New Mexico and Rhode Island) have legalized sports betting and only 10 states have indicated no interest in passing a sports betting bill any time soon. States like Alaska, Wyoming and Idaho couldn’t support a pro team anyways, but a football league that is true to the sport and that can get some of the players who just missed the NFL cut or current players that are close to retirement could indeed work if the league is willing to center itself around betting and encourage wagering on its games. It worked in the UK with subsidiary soccer leagues and it could work here too. But without the betting aspect, any new off-season league is doomed to failure.