FanDuel and DraftKings both were able to offer sports betting after U.S. gambling laws were changed, but not all parties have been thrilled with the outcome.

When FanDuel and DraftKings proposed a merger in 2016, the move seemed necessary for both companies’ survival. Daily Fantasy Sports was seeing a huge decline in interest and there was speculation that without the merger at least one of the DFS sites would have to fold. Unfortunately for both companies, the FTC stepped in and blocked the merger since together it would have given the new merged company over 90% of the DFS market, which the FTC said violated anti-monopoly laws.

The news came as a relief to many DFS players who preferred one company over the other for various reasons, including the fact that DraftKings was willing to take more risks and offer contests on non-team sports like NASCAR, golf and MMA, while FanDuel focused on major pro sports and had more options available on the major team sports. However, what seemed like a death blow to the DFS industry would eventually turn out to be a blessing and a curse.

At the start of 2017 both DraftKings and FanDuel were pondering their next moves amid mounting losses and the election of a new Republican president. No one seemed to know whether Trump and his team would be an ally to gambling interests or an adversary. While Trump made most of his money from building casinos, he also had to face the fact that there were many Republicans in the House and Senate who were gambling opponents that had previously fought to curtail gambling expansion. As well, many were beholden to Sheldon Adelson, the largest donor to Republican campaigns. And as everyone is aware, Adelson made it his mission to remind those Congressmen and Senators of the quid pro quo arrangement and demanded every effort was to be made to reverse the 2011 DoJ opinion which opened the door to legal online casino and poker betting. Trump's choice for AG, Jeff Sessions, also stoked the fire when he suggested he would look closely at the 2011 DoJ opinion if confirmed. Daily Fantasy Sports was not specifically mentioned anywhere, but because it is a clear form of online gambling, its de-legalization could not be taken off the table.

Repeal of PASPA a turning point 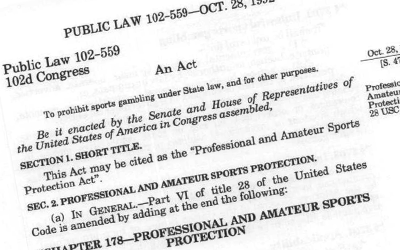 So, the industry was in a confused time, but what no one could foresee was how the whole outlook for both companies would change in June 2017, when the Supreme Court announced it would hear the New Jersey appeal to have PASPA overturned on the grounds it violated the 10th amendment. In 2011 the state voted by a 2/3 margin to allow sports betting at the state casinos and racetracks and in 2014 Governor Chris Christie signed into law a bill to permit sports betting. Immediately, the major sports leagues and the NCAA challenged the New Jersey law and lower courts repeatedly denied Governor Chris Christie’s efforts to apply the law, saying that the New Jersey law violates the 1992 federal law that prohibits sports betting and federal law trumps state law. As a last resort, the state appealed to the Supreme Court and to the shock of everyone, the highest court agreed to hear the appeal. In fact, there were suggestions that SCOTUS actually solicited that lawsuit over others because they wanted to rule once and for all if the federal government had the right to pass laws on the states in social areas like gambling. It was also about this time that some league commissioners, led by NBA Commissioner Adam Silver, were softening their stances and lifting their opposition to gambling on the games.

The reason the decision to hear the case was so significant to both FanDuel and DraftKings is that if they were ever allowed to get involved in sports betting itself, it would open a whole new avenue for each company, despite the fact that both DFS companies insisted from the outset that daily fantasy sports was in no way, shape or form sports betting, since that would violate U.S. law. Nevertheless, when SCOTUS indicated they were going to hear the case, several states jumped in and started passing laws to legalize sports betting if SCOTUS overturned PASPA. And to the surprise of many analysts and possibly even to the fantasy sports sites, some states introduced bills that would combine sports betting and fantasy sports. Iowa and Mississippi even suggested that DraftKings or FanDuel would be given the option to run the sports betting for the state. Almost immediately, interest in both companies started pouring in from other gambling companies overseas who were looking for a way to get into the U.S. sports betting market, as well as from some U.S. investment companies and the general public who were salivating at the opportunity to own stock in the DFS sites.

DraftKings opened its first sportsbook in New Jersey in 2018 after the repeal of PASPA and now operates land-based sportsbooks in Iowa, Mississippi and New York, as well as mobile sportsbooks in New Jersey, Indiana, Pennsylvania and West Virginia. In April 2020 it also went public after completing a reverse merger with Diamond Eagle Acquisition Corporation and SBTech Global Ltd., a technology company that provides platforms for sports betting products. The stock price has almost doubled from the initial offering and it would likely be far higher except some investors have gotten spooked by an announcement by the IRS that it is considering treating fantasy sports fees as taxable income. As well, the company announced a higher than expected loss in the first half of 2020, mostly due to COVID-19. Nevertheless, many believe that the company has a bright future ahead of it and the stock price will likely exceed $100 once the pandemic is over. The current market cap is over $12.5 billion for DraftKings.

As for FanDuel, when SCOTUS officially overturned PASPA, the UK betting company Paddy Power-Betfair (now known as Flutter Entertainment) indicated they were hoping to buy FanDuel to give the UK company a foothold in the U.S. market. Flutter was interested in both the sports betting operations and daily fantasy sports offerings of FanDuel, although its main focus was on sports betting. Flutter eventually paid $465 million in cash and some stock for FanDuel in a deal completed in July 2018. FanDuel now operates land-based sportsbooks at the Meadowlands Racetrack in New Jersey and at a casino in Valley Forge, Pennsylvania. They also run mobile sportsbooks in New Jersey, Indiana, Pennsylvania and West Virginia.

While DraftKings operatives are reveling in their new success and wealth the same cannot be said for FanDuel founders, early investors and employees. Without going into great detail, all former parties from FanDuel have launched a lawsuit in Massachusetts State Court claiming that they received nothing from the buyout by Flutter Entertainment. They claim that the buyout was purposely undervalued by KKR and Company and Shamrock Capital, two groups of preferred investors which took over control of the FanDuel board after providing $275 million in emergency financing to keep FanDuel going through rough times.

According to the suit, under the terms of the deal FanDuel investors were to receive 40% of the merged company listed as PPB.F on the UK stock exchange, which currently has a market cap of 20.4 GBP or approximately $27 billion USD. The deal was completed in July 2018 but KKR and Shamrock valued the entire deal at $1.2 billion (ignoring what Flutter has made worldwide in other operations) thus only making FanDuel’s share worth $559 million in the deal. And under the terms of the deal, the preferred shareholders (namely KKR and Shamrock) would receive the first $559 million while the former shareholders and founders, including Nigel Eccles would receive anything over and above that amount which was zero. There was no indication why KKR and Shamrock wanted to undervalue the price of FanDuel, although those in the lawsuit and many analysts feel it was because there was an unnamed side deal that would provide KKR and Shamrock a share of any future earnings, which could amount to billions of dollars.

KKR and Shamrock Capital insinuated that the founders should be happy to get nothing because they bailed them out during the tough period:

"KKR and Shamrock stood by and supported the company during difficult times," the firms stated. "We are confident that the facts will demonstrate that the allegations in this lawsuit are completely baseless."

Blessing and a Curse

So, looking back at the FTC decision to deny the merger, it was a blessing in disguise for the founders, early investors and employees at DraftKings. The company now is worth billions and there is a pending deal with Playtech which will help DraftKings also become more relevant in the casino and poker areas of the gambling market. But for the founders, early investors and employees of FanDuel, the declined merger turned out to be a disaster. Undoubtedly, had the merger gone through the $1.2 billion proposed value of the merged companies at the time would now be at least 10 times that amount and more importantly those that helped build FanDuel would still be an integral part of the growth and expansion into sports betting. Instead they have been pushed to the sidelines and must watch as other later investors get rich and benefit from their early efforts.

I spoke to a couple of attorneys on the lawsuit and the general consensus is that while former FanDuel investors have many viable concerns and reasons to be angry, legally they don't have a leg to stand on. When they turned over control of the board to KKR and Shamrock and allowed them the right to make decisions for all FanDuel investors, they ceased having any more say in the situation. It's unfortunate and it may not be right, but to quote Donald Trump on his dealings handling COVID-19 "it is, what it is."