Following last week's shocking DFS revelations it seems almost certain now that rules will be implemented either voluntarily by the industry itself or forced by politicians.

The gambling world has been all abuzz of late after the New York Times released a report about so called 'insider trading' on daily fantasy sports.

According to the article a worker at DraftKings, Ethan Haskell, inadvertently leaked data related to DraftKing's $2 million NFL contest. The data showed which players were being drafted the most and the prevalence of players across various lineups. For example it showed that Julian Edelman was drafted by 36.68% of entrants, Rob Gronkowski by 35.12%, Antonio Brown by 32.1% etc. Usually the information is released on the website after the contest begins but in this case it was released early and as a result gave knowledgeable players an advantage over the novice players. In fact a good friend of mine, Jeff Harrison, who plays DFS and wins regularly said that this type of information would be as valuable as being one of very few people with access to the tote board in a horse race:

"Everyone that is any good at DFS will create an expected value on players and will draft their team based on both the value and how many people they think will also draft that player. As an example, you may deem Antonio Brown is worth a salary of $8,000 and expect that 40% of people will draft him. If his salary is $9,000 or more you'll probably pass and if it's under $7,000 you'll almost certainly draft him. But if his salary is close to the $8,000 the decision is difficult. But that decision becomes much easier if you know how many other people are drafting him. Naturally the more who draft the player the value goes down and the less who draft him the value goes up. So if you find out ahead of time that only 30% drafted Brown then he becomes an extremely valuable player even at the listed salary since you expected 10% more people to draft him. If, however, 50% took him then you would avoid him since his value is low and if he does poorly you're way ahead of the game because 10% more people are stuck with him. It's like the tote board at a horse race. You can deem a horse has a 25% chance of winning and will be willing to take anything at 3/1 odds or better. You can never know for sure the final odds but if you are given insider information that the horse is going to go off at 6/1 of course you will bet on that horse." 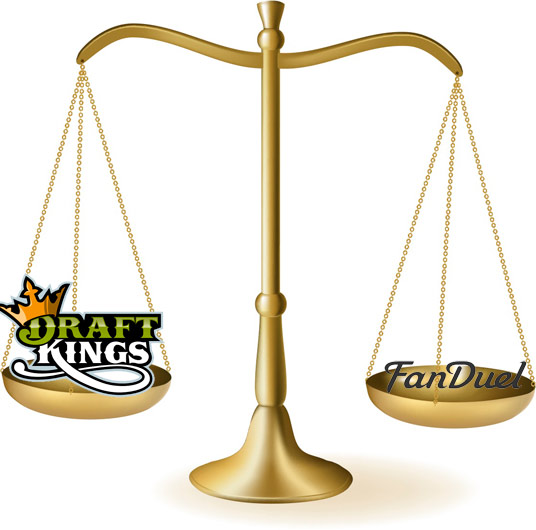 What makes the insider leak more concerning is news that Ethan Haskell wins regularly at DraftKings' competing site FanDuel and he won $350,000 at FanDuel the week of the leak. While fantasy sites have rules about staff playing at their own websites, there is nothing that precludes them from playing at a rival site. The concern of course is that the lineups and salaries at both sites are similar even though the rules may be slightly different, so anyone who has access to the type of information Haskell leaked ahead of time would have a huge advantage at the rival site, since ownership percentages at DraftKings for their list of players will likely be similar to those at FanDuel. And obviously Haskell gets that information for DraftKings as he demonstrated.

Strangely some in the media are even equating it to the Ultimate Poker and Ultimate Bet scandals where superusers were able to cheat regular players in large buy in poker tournaments by viewing the hole cards of the other players and betting accordingly. The two events of course are not relatable at all and the poker scandals were far worse since it was a clear form of cheating by former employees of those companies but the fact that some are comparing the two at all is an indication that DraftKings and FanDuel have a real public relations problem right now.

As a result of the outcry the sites felt obligated to release a statement saying that no rules were violated and that that the public has no beef with them. In fact shortly after the release of the story the Fantasy Sports Trade Association (FSTA) issued the following statement:

"The Fantasy Sports Trade Association (FSTA), DraftKings and FanDuel have always understood that nothing is more important than the integrity of the games we offer to fans. For that reason, the FSTA has included in its charter that member companies must restrict employee access to and use of competitive data for play on other sites. At this time, there is no evidence that any employee or company has violated these rules. That said, the inadvertent release of non-public data by a fantasy operator employee has sparked a conversation among fantasy sports players about the extent to which industry employees should be able participate in fantasy sports contests on competitor sites. We've heard from users that they would appreciate more clarity about the rules for this issue. In the interim, while the industry works to develop and release a more detailed policy, DraftKings and FanDuel have decided to prohibit employees from participating in online fantasy sports contests for money."

So in better words DraftKings and FanDuel are saying that because no one at FanDuel actually released information directly to Ethan Haskell then there is no concern and the fact that Ethan Haskell has all the information from DraftKings that he could use to beat FanDuel is irrelevant. But they understand there is a conversation about whether it should be allowed.

But this of course is a red herring. As was mentioned previously the two sites have similar players and similar salaries so of if Ethan Haskell was querying what was occurring at DraftKings prior to making his picks at FanDuel then there is a huge concern. After all, no one else has access to that information so why should he get that advantage? DraftKings must have received a lot of queries after the FTSA release, so Daniel Roberts from the company issued the following statement on Twitter:

Of course DraftKings can say what they like and hope it just goes away, but there are still many skeptics and there are a lot of questions that need to be investigated and answered by independent fraud investigators. In particular:

1  - Who exactly has access to player data at both DraftKings and FanDuel and have any of them played at the other site aside from Haskell? Moreover how have they done?
2- How often is the database queried by those employees and what happens to those queries? Is it logged? If so, how long are the logs kept and where exactly are the held?
3 - Have there been any phone calls, text messages or emails between employees at FanDuel and DraftKings (or for that matter any other fantasy websites)? If so what exactly was discussed?
4 - How did the "inadvertent leak" happen? What safeguards were put in place to ensure this wouldn't happen and how was Ethan Haskell able to circumvent those safeguards and put the information on the DraftKings website?
5 - Why are employees permitted to play at other websites? Was this ever discussed internally and what were the conclusions that made those sites believe there was no conflict of interest?

As a result of the scandal there are now calls by various politicians to look into Daily Fantasy Sports and possible regulation and some DFS players are looking into launching a class action lawsuit against both sites. But what should be more concerning to the DFS industry is that this attention has brought a lot of focus on the product itself and has many people asking if it's a form of gambling that needs to be outlawed.

Jim Murren, the CEO of MGM Resorts has gone on record saying that DFS is a clear form of gambling that must be looked at by the government. New Jersey Senator Ray Lesniak has gone on record calling it the ultimate form of hypocrisy that DFS is allowed nationwide while New Jersey and 45 other states are not allowed to offer sports betting of any form. And everyone knows that it's just a matter of time that Sheldon Adelson will call for the ban on this form of Internet gambling. And naturally the leagues have indicated that they will be taking a closer look at the details relating to the leak to see if any action needs to be taken on their part. At the same time it's also clear that the leagues are not going to give up the multi-million dollar deals that they have with FanDuel and DraftKings. In fact each league is benefitting greatly from their arrangements and the only league that has not inked a deal directly with those companies is the NFL, although several NFL franchises have separate independent deals.

I spoke with Larry Walters, a first amendment attorney who specializes in gambling and asked him for his opinion on the DFS leak:

"This first public scandal in the emerging DFS industry is likely to spur Congressional inquiry and calls for regulation at both the state and federal levels. While the industry has largely ducked regulation thus far, it is now on the radar of those with the authority to impose restrictions - particularly on the use of insider information by employees. Adoption of voluntary, robust industry standards might ward off legislation, but given the size and growth of DFS, some regulation seems likely."

So while it seems unlikely that Ethan Haskell committed any rules violations in relation to the data leak and playing at FanDuel, the mere fact that the story is all over the media has created a huge public relations scandal for the DFS industry, which is unlikely to dissipate anytime soon. It seems almost certain now that rules will be implemented either voluntarily by the industry itself or forced by politicians that will require that all drafting information be available to everyone all the time to ensure transparency or more likely that rules will be put in place that will disallow employees from playing at any fantasy sports site. The problem with the latter is that those employees can use friends or distant relatives to get their plays down for them as happens with other fantasy contests. But the leak could also lead to the government looking more closely at DFS and asking if it is a form of gambling that was not intended to be included in the UIGEA carve out and if so whether it should be banned. And if they conclude it's now too big to stop the next question is why this is allowed while sports betting isn't except in Nevada and in parlay forms in Delaware, Montana and Oregon. This is clearly a question the government and courts have been doing their best to address, but may have to now. Either way American gamblers will win in the long run thanks to the Pandora's Box which was opened by this leak.