This week is the running of the Cheltenham Festival in the UK. 250,000 people will attend the races and likely wager almost 500 million USD, but the event is always met with controversy.

This week is the running of the Cheltenham Festival in the UK. 250,000 people will attend the races and likely wager almost 500 million US Dollars at legal bookmakers. The festival features the best steeplechase and hurdlers (collectively known as jumps races) in the UK but the event is always met with controversy. The difficulty of the jumps, the distance of the races, the weights of the jockeys and the nature of steeplechase racing in general always results in several horses being destroyed along with many others that won't be able to race again due to injury. 2006 was deemed the worst year for the event in recent memory when 11 horses had to be put down at the festival leading the British Horse Racing Authority to lessen the size of the fields in some races and relocate a few of the more difficult jumps. Nevertheless the festival still sees its fair share of fatalities and it brings to light the dangers of jumps racing. As a result and many animal activists and even traditional horse racing enthusiasts will be asking if steeplechase and hurdles racing is really necessary or is it just cruel. Most fatalities are due to broken bones as a result of falls although other diseases including heart attacks occur occasionally as a result of the exertion put on horses since the races are always between 2 and 4 miles in length. 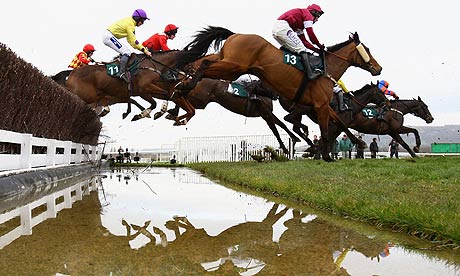 The higher risk of mortality in jumps racing is undisputed. The most recent published statistics showed that approximately 1 horse dies for every 140 starts in jumps races compared to 1 horse for every 2300 starts in flat racing. Many jumps racing advocates will argue that it's no different than equestrian which is an Olympic sport but there are many differences. At the equestrian the hurdles usually aren't as difficult, the horses take short breaks between jumps and most importantly the horses run on their own. So even if a horse does fall in equestrian (which is rare) there is no fear of that horse being stepped on by another horse which is often a reason for fatalities in jumps racing.

Of course other advocates will simply argue that horses are property and that people shouldn't be so concerned if they die in racing. All that matters is human life. In fact I was having lunch with a former colleague of mine a few years back at Burger King and we were discussing the death of Eight Belles at The Kentucky Derby. He nonchalantly said: "you didn't care about the welfare of the cow you're eating so why do you care about the welfare of horses? Animals are put on earth for the pleasure of people to use them as we see fit." I found the statement to be callous but it did indicate that some people don't have the same regard for animal life as others. In fact last year, Ruby Walsh, who is arguably the best jumps jockey today and possibly ever, and who has ridden several Cheltenham champions had many heads turning when he made a statement after the champion horse he was riding, Our Conor fell and had to be destroyed:

The comments were met with anger from animal rights groups; fans and horse owners which felt that Walsh was indifferent and that if he no longer had empathy towards the animals he was riding then perhaps he should leave the sport. But Walsh later tried to clarify those statements although many felt his clarification was just as bad:

"We look after horses like they're pets. There's a huge difference between your pet and your family. That's the point I was making. There's a big difference between you going home tonight and something's happened to your dog, and you go home tonight and something's happened to one of your kids. There's a huge difference. We look after horses like they are pets, and that's the feeling you get when something goes wrong. At the end of the day, it's still your pet. It ain't your son, your daughter, your brother, your sister."

But empathy aside the question to others is far more basic, namely why can't we just have flat racing? I talked with Vicky, a thoroughbred owner in the UK, who said she loves and respects the sport but finds steeplechases barbaric:

"I am of the strong belief that horses love to run. I see it every day but I don't believe they love to jump. It's the reason that so many horses refuse at fences or pull up. But really why are we forcing them to jump anyways? There is just as much pleasure for fans and owners in flat races as there is in jumps. I think most true horse racing fans will tell you that a head and head battle in the stretch at The Epsom Derby or the Breeder's Cup is more exciting than watching steeplechasers jumping over a ditch or fence at Cheltenham or Punchestown. And I know many so called fans that close their eyes whenever horses approach a fence. How is that enjoyable when you're actually expecting a catastrophe? So if people can be entertained by a less harmful form of racing why can't my industry promote that over the harmful one?"

Of course to others it's a moot point because it's all a matter of money. Gerald who worked in the industry for years told me that the UK, Ireland and France would never ban the activity completely because it would devastate the industry there and actually hurt their domestic product.

Gerald commented, "I don't have exact numbers but horse racing contributes an enormous amount to the governments over here and most of it comes from jumps. With the exception of the big festivals at Epsom, Newmarket, Ascot and York flat racing struggles in the UK. Sure bookies do well but attendance is not that high and the handle at the track is fairly low. It's why the field sizes of flat races during the week at places like Muswellbrook or Southampton are so low but jumps at the same tracks are packed with fans. The customer is right and if the customer says they want jumps then that's what they'll get. I have no personal opinion on the barbarity of jumps races although of course I grew up with it so I might be sensitized to horse fatalities although I do prefer a good mile and a half race on the turf of Newmarket over a drawn out steeplechase."

"One group that seems indifferent to changes so long as the races continue are the bookmakers."

While many believe jumps races only occur in Europe that isn't the case. There are 11 states in the U.S. that offer hurdles racing and the first race at the Saratoga meet is almost always a hurdles race that draws crowds and excitement. There is inevitably a big fall in that race although horses usually escape uninjured. That said, the vast majority of racing in the United States is flat racing and jumps racing only is held on special days. In Australia, however, it's different. A push to ban the activity a decade back resulted in Queensland and New South Wales making the sport illegal and only Victoria still allows jumps. And there is a strong campaign by several groups in Victoria to have it banned too although the government of Victoria recently gave money to help build interest in jumps.

As a result of the difference of opinion several groups are trying to come up with a solution that would allow jumps racing to continue without as much protest but also make it safer for the horses. Included in the suggested solutions are smaller hurdles, shorter races, more flexible fences, smaller field sizes and a requirement of more time off for horses between races. Naturally jumps advocates argue that some of those changes would take away from the excitement and integrity of the races and a few jockeys claim that the flexible fences would make horses lazy and take their minds off the race which in turn would result in more tragedy.

One group that seems indifferent to changes so long as the races continue are the bookmakers. I spoke with the bet manager at a large UK site who said that aside from football (soccer) jumps racing is by far the biggest money maker for the sportsbooks.

"If jumps were ever declared illegal it would devastate us," the bookmaker said. "If the sport can be made safer then naturally we support it. No one wants to see a horse or jockey die any more than we want to see a driver killed in an F1 race. But horse racing is a business, we are a business and in the end what's most important is that we all flourish. Bookmaking creates wealth, jobs and allows our government to help the needy from their portion. We just don't want to see any drastic measures which could change that."

So whether or not jumps racing is cruel is a matter of opinion, although it's obvious that to many in the industry that's not even really a concern. What almost everyone will agree to is that traditional flat racing can be just as exciting and it's not nearly as dangerous for the horses. At the time of this writing day 2 of the 2015 Cheltenham Festival had just concluded. Five horses fell on day 1 and one horse, Theatre Queen, had to be destroyed after breaking her back. One of the most notable falls was by Annie Power, a 7 year old mare in the Mares Chase, who was a 1 to 2 favorite and cruising to an easy victory when she tripped on the last fence and fell, dismounting Ruby Walsh. Another 5 horses fell on Day 2 and though there were no fatalities, Rolling Star apparently was badly injured in the Coral Cup.

What was notable is that bookmakers stood to lose up to $100 million had Annie Power won due to high odds offered earlier on the prop bet for Walsh to win the 5 major races of the day. It's not surprising that there are conspiracy theorists on the web who not long after the race wonder if the fall was somehow coordinated to save the bookies from total disaster. For the sake of both the horse racing and betting industries let's hope it wasn't.