For the first time in quite a while there's a great ring of excitement surrounding the Grey Cup final. Websites are providing numerous proposition odds for the game.

For the first time in quite a while there's a great ring of excitement surrounding the Grey Cup final. For the last 7 years, the Eastern Conference of the CFL has been represented by either Montreal or Winnipeg which is quite sad considering only 4 teams play in that conference – Toronto and Hamilton being the other two. Toronto is obviously the largest city and market in Canada but the team has struggled. The lack of a good quarterback as well as terrible coaching has kept the Argonauts near the bottom of the standings in recent memory but in 2012 they went after highly sought quarterback Ricky Ray and the risk paid off. Ray passed for over 4,000 yards and completed over 68% of his passes in 2012 despite missing 4 games due to injury. The team struggled when he was injured but finished the season at 9-9 including 2 exciting victories at the end of the regular season and impressive victories in the post season. In the Eastern final against Montreal, Ray passed for almost 400 yards, completing over 75% of his passes. The Argonauts will play the Calgary Stampeders, who upset the BC lions last week thanks to an impressive running display by Jon Cornish and a 303 yard passing game by Kevin Glenn. Calgary finished the year with a 12-6 record including 4 straight wins and was one of the hottest teams in the league at the end of the regular season. 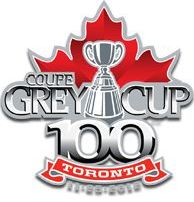 While the Grey Cup always has some following in Canada, there has been less interest in recent years. The 2012 Grey Cup, however appears to be different. For the first time in almost a decade Toronto is in the final and this game will be played at Rogers Centre for the 100th playing of the contest. The last time a Grey Cup was played in Toronto was in 2007 and the last time Toronto played at home in the Grey Cup was in 1982 when they lost to the Edmonton Eskimos at Exhibition Stadium in the pouring rain. The NHL lockout has also turned many fair-weather CFL fans into followers and Canadian sports fans looking for a sports fix are prepared to tune into this game rather than the NFL or NBA which are less popular. There is quite a bit of wealth in both Toronto and Calgary and the result is that Grey Cup tickets which in the past have not been a hot commodity are being sold on Ebay by scalpers for up to $1,000 a ticket.

Obviously the Grey Cup does not generate as much interest stateside but there are quite a few followers in the United States and many offshore sites that cater to the U.S. market including Bovada are providing numerous proposition odds for the game. The following represent great betting opportunities:

In the last 20 years, 2/3 of the winners were quarterbacks. It's hard to see this game being any different. The game is being played indoors at the Rogers Centre and there's no doubt the teams will pass on at least ¾ of the downs. Calgary may try to establish the run more so than Toronto but in the end expect over 300 yards passing by both quarterbacks. And unlike in past grey cups there's no receiver that stands out for either team so the ball should be distributed fairly evenly which makes it unlikely a receiver will win the award. The best play here is to decide which team you like to win the game and bet the corresponding QB for MVP. Current odds at >Bovada are 9/4 on Glenn and 11/4 on Ray.

Will more than 4.6 million people watch the Grey Cup?

This bet is effectively free money. In 2011, when the game had little interest 4.6 million viewers tuned in. In previous grey cups well over 6 million viewers tuned in and this year it could be as high as 7 million. With the hockey lockout more viewers from across the country will watch the game not to mention Toronto residents who have moved to other provinces. The starting time of 6 pm ET (3 pm CT) will attract more viewers from the western provinces than when it started earlier and the start time provides a good lag before the Sunday night NFL contest.  I rate at least a 90% chance the game will draw over 6 million viewers so Bovada's 1 to 2 odds of drawing at least 4.6 million viewers is pretty much as sure thing.

One of Calgary's strengths is good coverage on receivers. There's no doubt that there will be instances where Ricky Ray will be looking for a receiver, will find none and will run down the field instead. Ray surprisingly has good mobility in that area. Since the over/under for rushing yards by Ray is only 7.5 the Over at -115 seems like a good wager.

Similar to Ray, Glenn is fairly mobile so there's no reason he wouldn't take off once or twice in the game. Bovada has Glenn's total rushing yards at 8.5, so over 8.5 years at -115 seems like a good wager also.

This game sets up to be a shootout and in the dome there's no reason to expect anything different. CFL games generally are high scoring and the last time Ricky Ray played in the Grey Cup, the two teams combined for 73 points.  The total will just creep up by game time so a middle opportunity may even be available come Sunday.

Who will win the game?

That question is the hardest prediction by far. The line currently is Calgary -2. Calgary probably is the logical pick but I'm one who believes in fate. Toronto is playing for the Grey Cup in the 100th year at home in front of a sold out crowd and at a time when most Candian sport's fans eyes will be tuned to this game as a result of the NHL lockout. A Toronto win would do more for the sport in Canada and could help rejuvenate an audience that has more or less tuned out of the product. I look for Toronto to pull out a hard fought win with the winning score coming in the last 3 minutes of the game. My predicted score Toronto 34 Calgary 30.

Bovada has almost 40 offers on the contest so others may be appealing to all bettors as well.