With sports betting legalization looming, Hartley examines how DFS can survive and compete against sportsbooks and single game wagering.

Once sports betting is nationwide, DFS may lose customers

It isn’t news that daily fantasy sports revenue has tapered off and both FanDuel and DraftKings were forced to take measures to stay alive. The two companies had planned to merge in 2016 to cut costs and allow for better economies of scale but a Federal Trade Commission ruling thwarted that effort. Nevertheless, the companies have continued to operate independently, and some cost savings measures enacted in the last year along with banned states coming back into the game has helped their bottom lines. According to reports, the whole DFS industry had revenues of just over $327 million in fiscal 2017 with a handle of about $3.2 billion. That is comparable to figures of the prior year, but are sharply lower than the handle and profits prior to the DraftKings scandal, which led several states to ban the companies and customers to pull out. Don’t forget, prior to the 2015 scandal, projections were that DFS handle would exceed $20 billion. Both FanDuel and DraftKings are estimated to be worth about $1.2 billion.

The companies do have a fairly large customer base (estimated to be over 1 million players), but many analysts feel those customers may be fickle. There is a strong belief by many industry experts that the majority of DFS customers are only playing at those sites because sports betting isn’t legal in the U.S. and those customers aren’t comfortable wagering offshore or with underground bookmakers. They also feel that when sports betting is legalized a large majority of those customers will move their money to the sports books, so they can wager on game outcomes rather than on player performances.

Other industry people aren’t so convinced. “I have no doubt whatsoever that those sites will fold in at least a dozen states if PASPA is repealed,” one writer for the DFS industry told me, “but there is a lot of opportunity to expand in large states too which could make DraftKings, FanDuel and Yahoo bigger than ever.” 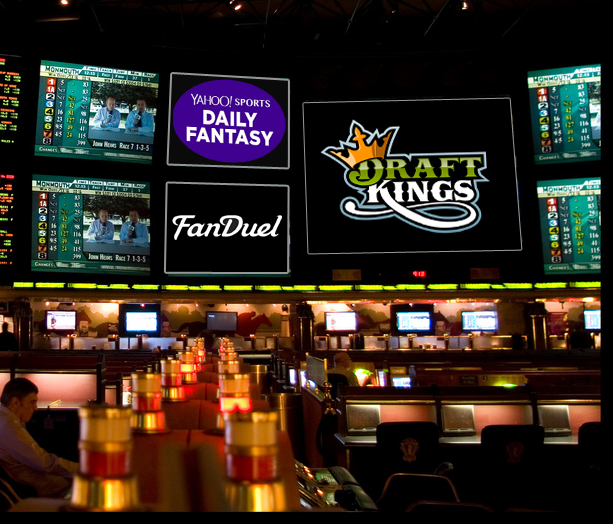 The DFS writer, who asked not to be identified since the website he writes for may see it as a conflict of interest, said that it’s hard to see DraftKings, FanDuel or Yahoo surviving in state like Iowa, but in states like New York, California, Florida or Illinois there is clearly room for both products to co-exist. Moreover, he contends that a federal repeal of the sports betting law could actually help DFS flourish since a lot of the chains that currently bind the product might be lifted.

The regulations that dictate what is allowed in fantasy sports are written in the UIGEA, the Unlawful Internet Gambling Enforcement Act, of 2006. But the regulations of the UIGEA, along with the law, are confusing and almost everyone agrees that the intent of allowing fantasy sports in the UIGEA was to authorize rotisserie leagues and had the legislators taken the time to really consider the regulations, DFS would never have been permitted. But the law was passed quickly, and the regulations were written hastily in the last days by an Attorney General who had no real idea of what he was doing, so consequently there was no rule put in place stating that in order for a contest to be legal it had to be a season long competition. The only rules indicated that the contests must consist of multiple games or days and must involve team sports. This lack of foresight provided the opportunity for legalized daily fantasy sports wagering and both DraftKings and FanDuel took full advantage. FanDuel has pretty much stuck to the rules as written, but DraftKings has been willing to take liberties with the law and to date has not been asked to change their ways. The company offers contests on golf, NASCAR, MMA and E-Sports along with the traditional team sports and most recently they have begun offering something called a “showdown” which allows play on a single game.

So, in showdown for a game between, say, the New Orleans Saints and the Philadelphia Eagles a player would have to draft 4 offensive players and 2 defensive players within a $50,000 salary cap and at least one offensive player from each team has to be drafted. People who have played showdown said it’s okay but isn’t the same as the normal contests. Though they do believe that if a real DFS contest was possible for single games using traditional rules, rather than the showdown format, it would be huge -  particularly in championship games like the Super Bowl, World Series and NBA Championship game. If SCOTUS repeals PASPA it’s almost certain that would happen.

A couple of legal experts I spoke to have indicated that the courts and state attorneys really aren’t that interested in enforcing the UIGEA, which they believe is a confusing piece of legislation that can’t be properly enforced, and if PASPA is repealed and states start offering sports betting unhindered the courts may have no choice but to re-examine the UIGEA and possibly even the Wire Act. In the very least the courts will consider the new state laws to be the ones they enforce and the rules of the UIGEA will likely be deemed irrelevant. Consequently, it’s almost certain that FanDuel will also delve into sports like NASCAR and single game DFS contests to match DraftKings.

There is also the possibility that the DFS sites could reintroduce amateur sports in states that do not ban it. The sites voluntarily lifted contests involving the NCAA at the behest of the league, but if a state like Tennessee or New Jersey passes a sports betting law that allows wagering on college games, then it would be hard for the state or even the NCAA to expect the DFS sites to follow a different set of rules. And when the DFS sites were offering amateur sports, it was almost as popular as the professional sports, particularly in tournaments and bowl games.

There is also a real possibility that the DFS sites will apply to become bookmakers themselves and seek sports betting licenses in states where it makes sense. DraftKings has already hired a ‘head of sportsbook’ in anticipation of the law being struck down and founder Jason Robbins is on record saying that he believes DFS and sports betting can co-exist and over time he expects sports betting would become the biggest part of his business. And he is probably right. The two products would almost certainly do well since those who like to wager on player performances will still see DFS as their preference. Plus of course, the two products could complement each other. In Nevada and online now, props that involve individual performances are becoming as popular as the outcome of games themselves. In the NFL for example, a bet on how many passing yards Tom Brady will throw for often gets as much wagering as a lot of the more traditional bets. Of course, in DFS there is a requirement that one must pick a group of players within a salary cap but it’s easy to see how the ability to bet “prop” like bets in a DFS contest without a salary cap would be appealing.

More importantly, the ability for two competing products to both do well in a given market has already been proven. In Europe, DFS was recently introduced and sports betting has been legal since 1960. And an article in iGamingBusiness.com seems to suggest that both are doing quite well, particularly on European soccer matches. And Betfair, which made their name and niche with player-to-player betting markets introduced a sportsbook in 2012. Many experts called that move foolhardy since a fixed odds sportsbook would clearly be a direct competitor to a p2p market and there was an expectation that the sportsbook would cannibalize the exchange. But, the proof is in the pudding and Betfair has experienced growth in both areas since its inception.

To answer the question, therefore, whether DFS could survive a new law legalizing sports betting the answer is in some states yes and in some states no. But there is clearly a demand for both products and if the DFS sites and the states play their cards right, the legalization of sports betting could actually help DFS grow and increase revenues, which benefits everyone.