Handicapping tips and ticks for the Breeders' Cup on Saturday. Best Bet picks and analysis from Glenn's racing card, including the Classic.

One of the greatest things about the racetrack is that it can teach you a lot of valuable lessons in life.

When your horse loses, you can slam your program and curse for fifteen minutes how unlucky you are and blame the jockey. Or you can calmly throw your ticket to the ground and look back into the Daily Racing Form to see what you "may have missed", learn something from it and perhaps make it work for you in the future. After betting (and losing) more races than I'll ever want to admit, I say choose Plan B. And that includes several heartbreak tickets left on the ground or more accurately, within simulcast cyberspace for past Breeders' Cups.

You've Got to Know the Territory!!

With respect to the art of thoroughbred racing, there are probably a hundred books to read with many valuable handicapping lessons. All guides will tell you that "track bias" is a common fundamental factor. We haven't figured this out yet but for some unexplained reason, horses simply prefer certain race tracks to others. Similar to some prefer to run on dirt as opposed to grass surfaces.

And that brings us to the venue for the 2016 Breeder's Cup. Beautiful, historic Santa Anita Race Track. Where it has been proven beyond any reasonable doubt that "West Coast horses" or horses that traditionally are based and run at Southern California race tracks have a superior advantage over their East Coast competitors. That is not to say we should eliminate every horse that has run previously at Belmont, Saratoga, Keeneland or Churchill Downs, but history of the Breeders' Cup at Santa Anita or even Hollywood Park has clearly gone to the hometown entries.

The next question is to search for an answer why? Most experts agree that like humans, horses are prone to travel fatigue. The stress of shipping in vans across thousands of miles to unfamiliar place often takes its toll on many. Like being the home team in baseball, specific west coast based Breeders Cup horses have an advantage remaining in their home stalls, training on their home track and keeping the same regimen. 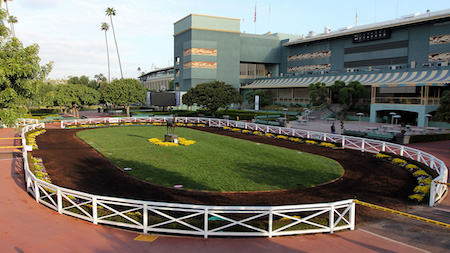 A big however here though. Keep in mind the controversial 2014 Breeders' Cup Classic run last at Santa Anita as a prime exception. This year's big favorite California Chrome was backed heavily but lost to Bayern, who was coming off winning the Haskell Invitational at Monmouth Park. The favorite was Shared Belief, a California-based star, who was knocked into out of the gate by Bayern however the stewards elected to make no change. Therefore, not every local based horse is expected to win Friday and Saturday.

Those hundred handicapping books will also remind you that it's called HORSE RACING, not jockey racing. However, lifetime horseplayers including me will be forever guilty of having their favorite jockeys and more so others to consistently blame. Overall, your horse runs once but the jockey rides in the next race making them much easier targets, heroes and villains as well.

That's where this get very tricky. As in the Kentucky Derby, there is not much loyalty among owners or trainers when it comes to jockeys. Only the best get invited to ride their horses given that at least a million-dollar purse is on the line in every Breeders' Cup race and often two million to three million or more. And when it comes to talent, Hall of Fame jockey Jerry Bailey said it best when asked, "95% of all riders have equal skill, it's the horse that makes the difference".

So, if it works that way for some $5,000 claiming race at Mountaineer, you know there's absolutely zero advantage for any one jockey in any Breeders' Cup race. Again, the only possible edge when making a split decision, back the jockey who is based in California, giving them much greater experience knowing the Santa Anita track, both dirt and turf. That has proven especially true for inexperienced foreign jockeys in the BC who race primarily in Europe and haven't had many races here. Exceptions being international star jockeys like Ryan Moore and Frankie Dettori, who are entered on starters this Friday and Saturday but have significant Breeders' Cup experience including many grass races at Santa Anita.

Get in on Breeders' Cup action at Elite-Rated BetOnline

While the Kentucky Derby & the Triple Crown gets all the glory, it's the Breeders' Cup that draws the attention of true horse racing fans. There is no better one day, make that two days now (Friday & Saturday) to savor the best racing action and wagering menu in the world. Full fields virtually every race with an unlimited supply of betting opportunity. With deep pools and so many exotic betting options, just one score can provide a bankroll and turn a profit.

The following are 3 Best Bet Races to consider. (ML) are the morning line odds.

#2 WITH HONORS (10-1)
A perfect example of the "home town bias" when having to select in an all-star field. Two winning turf races including a stakes race were followed by an excellent second in her dirt debut at Santa Anita. Can potentially go right for the lead and try to wire the field with young California-based jockey Flavien Prat. Should be an excellent price at 10-1 or perhaps better here.

#10 NOTED AND QUOTED (9/2)
Have a feeling this might be a tepid favorite around 3-1 in a very competitive field based on her connections. Trained by BC superstar Bob Baffert and ridden by Rafael Bejarano, who's won many BC races, the outside post might be to her advantage. Especially if a speed duel develops.

#5 SWEET LORETTA (6-1)
Might be the most talented filly here, going 3 for 3 but troubled trips in all races. Another star combo trains and rides this horse in Todd Pletcher and Javier Castellano. Question will be whether she takes to the Santa Anita surface and much better competition.

#1 KLIMPT (6-1)
This is the race where the winner is usually designated the early favorite for the Kentucky Derby. They will especially this year in a great field. This pick is a matter of handicapping strategy. Syndergaard and Gormley will be gunning for the lead with sentimental undefeated choice Three Rules not far behind. A potential wicked pace could set it up for another Bejarano/Baffert combo from the rail. Two major stakes wins already and should have won his last except for perhaps an overconfident ride by Bejarano at 2-5.

#4 THEORY (12-1)
Hard to say how good this colt is after two very impressive odds-on wins in New York. The obvious question is he will be going around the longer 1 1/16 distance for the first time and the strange California surface. Could be your Derby favorite and if so, the last time you will get this price for a long time.

# 6 THREE RULES (8-1)
Absolutely wanted to pick this guy on top and if he wins will be kicking myself. Five stunning easy wins at Gulfstream Park BUT against much lesser competition. Visually, he toyed with the other horses in all races. Cornelio Velasquez is a very underrated veteran jockey who the owners have stayed with here to ride. Have to include him in my exactas, trifectas, etc.

#4 CALIFORNIA CHROME (1/1)
So tough to go against one of the top twenty greatest horses of all-time. And maybe top ten. He's one in a million from not the most royal breeding plus tremendous respect to the owners to keep him going for love of the sport. Look for Victor Espinoza to break him on top and lay second, not trying to get into any speed duel. With any reasonable pace, Chrome should control the race but has very good competition to deal with. With a $6,000,000 purse, that is a given. A must to include top and bottom in exactas.

#1 EFFINEX (15-1)
If you're looking for an upsetter, this could be your guy. He's been right there with every horse in the field except California Chrome. Last year he finished second in the BC Classic at 33-1 to Triple Crown hero American Pharoah. Expect generous double digit odds again with new jockey Flavien Prat, substituting for Mike Smith who elected to ride second choice Arrogate for trainer Bob Baffert. Key here is the start as Effinex is prone to bad starts and then often loses focus during the race. But a good horse to put in the exotics for sure.

#9 HOPPERTUNITY (15-1)
"The other" Baffert horse in the race as everyone will have their eyes and money on Arrogate. Like Effinex, Hoppertunity is right there in every race against the best in the world. Coming off a win in the Jockey Club Gold Cup, John Velasquez can take advantage of a potentially fast pace and have this horse flying down the stretch. Best chance is for new potential star Arrogate to set a fast pace and then fold up, setting up a rally. But if Arrogate can repeat his incredible record breaking last race in the Travers, look-out. I just can't recommend that.