When Singapore recently announced it was going to ban online gambling made many offshore companies became nervous and have decided to leave the Singapore market immediately .

Many Americans will remember Michael P. Fay who made national headlines when he confessed to stealing road signs in Singapore and was sentenced to four months in jail, a fine of 3,500 Singapore dollars and 6 strokes with a rattan cane. The country was trying to cut down on vandalism, specifically with spray paint and chose to make Fay and others examples. While Fay admitted to spray painting cars on advise of council he later said that his only offense was stealing signs and council told him that if he admitted to spray painting cars (even though untrue) it would spare him caning. Bill Clinton tried to intervene to stop the caning, suggesting that corporate punishment for a non-violent crime was extreme, but the Singapore courts would not give in and in the end Fay received 4 strokes from the cane across his buttocks. 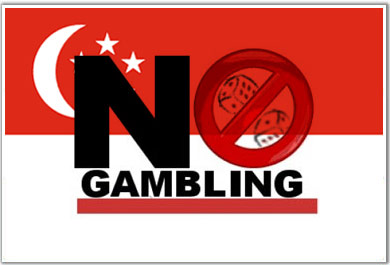 I recall speaking to a Malaysian born colleague, Richard Yew who went to a university in Singapore but transferred to one in Toronto about the incident and he admitted that it was the "insane logic behind their laws" that led him to flee the country. In particular he told of an incident where he attended university and smelled something strange coming from the room next to him (which he later learned was marijuana). In next to no time the Singapore police stormed the dorm room and arrested the 2 foreign students who claimed they were unaware of Singapore drug laws. The students only had the 2 joints on them so they received a fine and 3 months in jail. He also suspected that they were given an undetermined number of lashes from the cane but couldn't be sure. And of course, they were expelled and deported after the sentence was over. Yew said that if they had a full baggie as many students would have in North American dorm rooms it would be a mandatory death sentence as the law in Singapore deems possession over 500 grams to be trafficking and subject to death by hanging. What really made Yew nervous was that the police also raided rooms around theirs and interrogated him vehemently to make sure he was not in any way connected to his marijuana smoking neighbors. In Singapore being in the same room as a drug user or knowing that it is going on and not reporting it can get that person arrested for the same crime. After that incident Yew decided he needed to get out of the country should he ever inadvertently end up with the wrong crowd. He applied to universities in several countries and decided to go to Canada.

It's also noteworthy that Singapore has made it a capital crime punishable by severe jail sentences for various activities that aren't even illegal in most countries. Gay sex is illegal and punishable by jail time (heterosexual anal and oral sex were recently decriminalized for consenting heterosexual couples) as is attempting to commit suicide, selling pornography, cheating (punishable by 1 to 7 years in jail) and for marrying someone while the person you were formerly married to is still alive. So if someone has a secret family and the original spouse finds out, the person who concealed the marriage can expect to spend 10 years behind bars. Singapore also has misdemeanour laws subject to fines for chewing gum that is not medically beneficial (i.e. bubble gum), for having mosquito larvae in your outdoor flower pots and best of all, a 150-500 Singapore dollar fine for not flushing a public toilet. And while there are no urine detectors in washrooms as there are in elevators (it's a major penalty for urinating in an elevator), several people have apparently been caught and fined for failing to flush the toilet. Singapore argues that these laws have made their country one of the safest and cleanest in the world but others would say they have done so at the expense of personal liberties.

So when Singapore recently announced it was going to ban online gambling, it naturally made many offshore companies nervous. It pretty obvious that when Singapore decides to make something illegal, any violation of that law can be quite severe to both the merchant and the consumer. Gambling in Singapore was always restricted to Singapore Pools (their local lottery) which was founded in 1968 and the Singapore Turf Club founded in 1848 which offers horse racing. Seeing a huge opportunity to increase tourism and help stem unemployment with resort casinos the Singapore government decided to take advantage. They worked with a Malaysian company to build Resort World Casinos with shareholders splitting the profits but revenue to Singapore being designated to charitable works. The country also granted one foreign license in 2006 and the bid was won by The Las Vegas Sands who spent billions to build Marina Bay Sands. Under the agreement Sheldon Adelson's Sands Corporation agreed to give 15% equity to the government and in turn they received a 30 year license including 10 year exclusivity (Resorts World excluded). Both resort casinos are among the most attractive and expensive in the world and also the most profitable. In fact it is believed the casinos contribute almost 2% of Singapore's GDP.

" . . . a strong economic reason might just overcome a moral objection."

Unfortunately for Adelson and the government the success of the new gambling ventures also attracted offshore websites to start catering to Singapore residents who now had a huge taste for gambling, particularly on sports and poker. There was no law on the books to prevent online gambling so companies went in to the market full force, with the four biggest being Bet365, William Hill, Ladbrokes and PokerStars. This wagering was cutting into some of the local casino play but politicians gave the usual morals excuse that online gambling with these operators was causing gambling addiction, corrupting minors, etc. and had to be stopped. So several politicians put forth a bill in the Singapore Parliament to ban online gambling last year and last month it was passed. Surprisingly there was next to no opposition to the bill and in fact the only complaint by some politicians is that the new law doesn't go far enough.

But unlike the UK that wants that wants to regulate online gambling by forcing companies to obtain a license and unlike countries like France and Germany that want to keep online gambling but stop offshore operators from catering to their citizens to protect local monopolies, Singapore has issued a complete ban on online gambling. A couple of casino owners have indicated that they are certain Sheldon Adelson was instrumental in the harshness of the new law since he has such a vested interest with Marina Bay Sands, although they have no proof. There is one exception to online gambling and that's for charities, although there are very specific restrictions to obtaining the new charitable license that have many believing that no company, not even a charity, will go through the hassle. In fact, the law even requires the Singapore Pools and Singapore Turf Club to stop all forms of remote gambling within 6 months.

So what exactly is the penalty for violating the new law?

I spoke with Bryan Tan, a Singapore lawyer who has been commenting on gaming laws in the country and I asked him his opinion of the new law given that land based gaming already exists in the Singapore:

"An entirely personal view - but I think there is a practical side to Singapore politics. Gambling – yes, some of the politicians have strong views against it on moral grounds but if the question is then what about the casinos (integrated resorts) that have been permitted, then the rationale seems to be that a strong economic reason might just overcome a moral objection. (Whether this is logical is a discussion for another day).

So on remote gambling, the worry would be two-fold: the moral/social ills ground and the revenue leak. I do not have figures to back the true extent of this worry but I guess the authorities would. So even though the current offline gambling licensees are immediately banned, the exemptions that are being set up suggest that they will be among the first parties to be given exemptions (because they need to be Singapore-based, non-profit and with a track record)."

As a result of the new law many companies including Ladbrokes, Bet365 and PokerStars have decided to leave the Singapore market immediately to comply with UKGC requirements . . . and also to avoid any chance of arrest in the country. And other companies who operate in other jurisdictions may have to consider leaving Singapore too, even if they have generally been indifferent to local gambling laws.

As one company owner said to me off the record, "I'm not worried for our company. We can fend for ourselves and none of us will go near Singapore. But when they are ready to jail the bettors and agents we have to really look at those consequences. I'd hate to find out that someone has been tortured or jailed because they chose to bet with us. I know personally I'd find it hard to sleep at night."